We were on holiday in Crete and practicing some new kite routines on the beach.

During a break to take on much needed water I was approached by this Romanian person who kept asking all sorts of questions about our kites.
I am not used to being approached quite so directly by women and there was something definitely different about this one – and why was she on her own? – I quickly scanned the beach for signs of shady characters that were pretending not to be watching.

It seemed that she wanted to have a go. I was a bit wary at first but the wind wasn’t too strong – you can’t do too much damage to a kite on a soft sandy beach in low wind – and so I agreed to let her try one of the two-line deltas.
Hopeless! She couldn’t keep it in the air at all…!!! 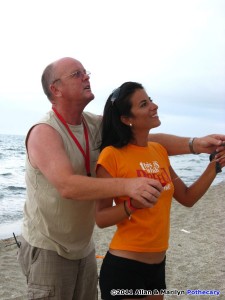 However, she did seem very keen so I thought that I might as well spend a little bit more time with her.

After fifteen minutes she had stopped crashing the kite and was able to steer from side to side at the top of the window.

By now dinner (and the wife) were beckoning. It was time to go so we shot off to the bar for some amber nectar before eating, leaving this woman now looking slightly bewildered, on the beach.

The next evening we were back – and so was she!!!

We were just thinking of packing up but what the heck – I thought I would let her have one more go – I’m a bit of a sucker when someone seems keen and they want help.

But this lady was a quick learner and very active too for her age (obviously KGB, I thought, or whatever they have in Romania). Amazingly, after just 20 more minutes we were flying simple figures in pairs together! Marilyn said that I must have felt quite proud to have been able to teach somebody to do that so quickly – Yes – I think I am getting quite good at it now! 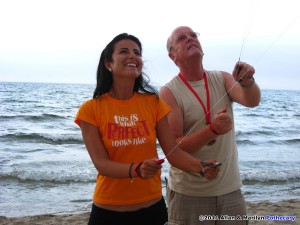 It just goes to show how wrong you can be about someone. It turns out that she is now very excited about kite flying and was a very friendly and interesting lady to talk to.

After all that it was a pity we had to leave the next day – I think I would have liked to have spent some more time with her.