The enthusiasm that preceded the third revoclinic held in Gandia (Spain) could already be felt in the forum discussion previous to the revoclinic, as 72 persons had confirmed their assistance.

Since Friday people were arriving from all parts of Spain and the illusion could be seen in all our faces. Our hotel was only 45 meter far from the beach. Many of us didn’t know each other and there was a great expectation to do so. I think that that night, every one dreamt of good winds and of the typical sun of that region, flying revos, of course.

We woke up early on Saturday because the meeting on the beach was starting at 09:30 and we welcomed the people who were arriving.

The sun was shining. Weather forecasts said there would be a good wind and so happened, even if it would have been better a faster wind (5 km per hour more) but it was not a problem to start the meeting and start working.

Badges with the numbers for the evening raffles and the special meals were distributed. Just like in the two previous revoclinics, Team Bolau and the González Brothers organized everything.

We were waiting half an hour more for the ones who were coming from very distant places and at 10:00 we started the meeting. We were all very excited.

We set the guidelines and built the groups. Everybody could choose the group he/she most wanted to be in and once in his/her group, he/she could stay in that group if he/she needed to or go to the next level group to execute what was proposed in each group.

The organization was the same as in previous years. There were four groups, initiated, newcomers, intermediate and advanced and teams (everyone who wanted could take part, above all with the sticks, even if during the flights, only the ones with experience and the ones who thought they could do it took part).

Fernando, Teresa and I were seeing how the day was going by, how newcomers were getting excited, how they passed from having never taken a revo to standing it in the air for a while, understanding a little more and getting experience. They were telling us that they were happy, that to see us flying was not enough for them now, they also wanted to fly the revo.

They were thanking us all the time for the opportunity and the experience we offered them. 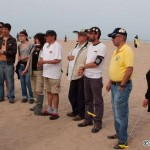 The advanced centered the activities above all on clinic. They transmitted all their knowledge and they renounced things to help the newcomers because this year we had decided to pay special attention to them. This is, in fact, the main purpose of the revo clinic.

We were 71, 3 young children and 10 two-threads acrobatic pilots. Some of them took part in the revoclinic. The other ones we were revo pilots or future revo pilots. Only 3 registered persons were missing. One important thing to say is that there were 20 persons who were participating for the first time.

The weather was great, the atmosphere was perfect and we took care of the revo family such as John B recommended.

Fernando was coordinating the initiated, newcomers and intermediate groups. Some pilots of the Imagina team and Viento Sur helped him, together with a member of the Vent de Levant team.

I was with the other pilots of the Imagina team and we were working with the advanced group. Teresa was injured, but despite everything, she was paying attention to everybody: helping the ones who dind’t have kite, lines or commands, noting down the meals, distributing the badges for the raffles, well, a very hard and necessary job indeed and she was doing it with such an illusion! She was enjoying helping the newcomers, taking care of them while they were taking care of her too. In the meantime, Fernando and I were going from one work group to another. 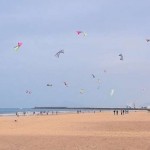 At midday we ate a “paella” (the marvellous regional food made of rice, meat and vegetables), all very satisfied of our first morning. We gained force, the confidence between us increased, even if we were knowing each others only for a couple of hours, we started feeling stronger friendship. After drinking our coffee, we went back to the beach to carry on with our stuff. We felt like a rev family.

The beach was full of revos. People taking a walk were watching us, enjoyed and amazed by what they were seeing. In fact, it din’t seem so strange to them because revos can be seen more and more on the beach and parks throughout Spain.

In the afternoon, the wind was blowing slowly and we started working with the Imagina team led by Armando. We had previously received from them an easy but very elaborate choreography so we had studied and memorized it. They told us to bring our sticks because this lesson “on the ground” was for everybody.

Then they’d decide who’d fly and who’d feel able to do it.

We took place making a circle, four at the time and the Imagina team was giving us instructions, rhythm and more advices to do the choreography.

Seeing the newcomers working with the sticks together with the advanced was a wonder, their interest was incredible.

We were wanting to fly all together (the wind was blowing weak but…) and so we did. We made five groups of four people each. Armando was sending us the routine to follow by walkietalkie and we were receiving the music, it was really incredible. 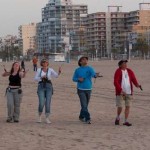 Armando and his team felt moved seeing us doing the choreography, newcomers and advanced all together. They told us that everything went on well and that they were very proud of the excellent evolution taking into account the different skill levels of the pilots.

In the beginning, we had planned that Fernan organized the mega team with lines and columns to build some figure but finally the wind didn’t give us the opportunity to do it. We tried to draw the japanese flag and write the word in the sky but we couldn’t because of the gusts of wind. But we had a special thought for the Japanese people.

The night came and we went for a rest and dinner. As following, we had a didactic meeting and the raffles.

Hilson prepared a capirinha to make the meeting even more enjoyable. Hilson comes from Brazil, he is a kite maker and a future revo pilot.

The Imagina team pilots teached us how to make a choreography, the method, the emotion, everything fully documented and with the fullest rigor.

We asked questions, we expressed feelings, newcomers and advanced were thanking us over and over. To tell the truth, we have to thank them for betting, risking, cheering up and loving our wonderful kite just as we do.

Sunday dawned pretty, a wonderful sun but gusts of wind, unsettled in its intensity and direction. We held a meeting and the newcomers went to train what they had learned and the advanced tried to do something. At midday, many of us had to go away because we had a long journey to go back home.

The goodbyes were very warm and all the participants told us that they would attend the REVOCLINIC 2012. In our journey back home, we, Team Bolau, were starting to note down new ideas to make better our next year meeting.

In the name of Team Bolau, we’d like to thank:

Pedro and Esteban, “The Brothers”, for providing us the infrastructure and framework.

The newcomers for being a new-blood and getting excited the same way and for the same things as we do.

Viento Sur, Imagina, José from Vent de Levant, for giving the best of you and renouncing your own enjoyement.

Ana and Inma for taking care of Teresa.

Quini for offering his present.

Hilson and Begoña for preparing the authentic capirinha of Hilson’s country and making us feel happy and for the presents they gave for the raffles (“pipas brasileiras”, brazilian kites).

José Manuel from Kiteparts for offering a revolution kite EXP for the raffles.

The ones who didn’t come because we know that they wanted to and couldn’t.

John Barresi for cheering us and for giving us affection to keep on going with the clinic. We hope that some day you’d come and share that experience with us.

Revolution Home for your participation and the presents you made, especially to Ben for trusting in us. We hope you’ll

be with us next year.

Thank you very much to all of you.
Team Bolau.