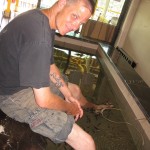 It’s been a great year thus far and we’re now past the halfway mark for our 2011 season – lots of great events, interviews and experiences already but we’re really looking forward to the “home stretch” with late season events like the Antelope Island Stampede, WSIKF, the AKA Annual Convention and others.

Among the highlights, a 9-day indoor show in Singapore that we’ve just completed, a 3-day clinic finds us back in Singapore mid-September, and then on to Bintulu (Malaysia) for iQuad’s 100th festival in five years, all of which we’ll be sure to cover extensively in our November and January issues.

With the proliferation of online kiting communities, it’s been amazing to see more and more international interaction amongst fliers, sharing ideas and inspiration through forums, YouTube video, Facebook and more – even Japan and France, who had traditionally been less communicative with English speaking countries (amongst online kite communities) are now getting involved with creative ideas and friendly encouragement… We’re very proud of the role Kitelife (et al) has played in the exposure and development of such wide-scale communication, and of the folks who have taken the lead in their own similar or complimentary areas.

So I think the question is, where will it all lead and what else can we do with the inertia we’re seeing? We’re very excited about the potential for further organization, and especially for a greater cooperative effort between the various genres of kiting… In the meantime, we’ll continue working to cover it all in our humble e’zine and hope you enjoy our efforts.

Next Prize Drawing to be held soon!