When I was first contacted about an event an indoor in Singapore, there was actually a moment of hesitation as I imagined 10 straight days of flying in a school gym for small crowds and giving non-stop lessons to grade school kids… Of course I’d rarely actually turn down a chance to fly for new audiences, but as I found out more about this event there was quite a bit more to it, all of which was just way too cool to pass up!

While Singapore is very much in a modern kiting boom with lots of growth, stores and flier groups forming in just the past 2-3 years, the organizers of this particular event (ACT3 International) is an independent organization with strong roots in theatre, performance arts and educational programs, all of which give them access to government funds and the range of arts that appeal to mainstream venues… Using this expertise and established connections in the community, ACT3 has been already been taking active steps to promote kiting, and especially indoor kiting, in a place where usable real estate is at a premium and people are always looking for new indoor activities. 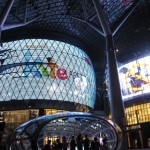 Speaking of mainstream, as one of the largest and most famous shopping centers in Singapore, ION Orchard boasts 4 basement floors and 4 mall floors located directly on the light rail line and connected to two other neighboring shopping centers by pedestrian tunnels, a bustling metropolis all on its own! Where else can you fly and perform for customers walking in and out of Dolce and Gabanna, Doir, Louis Vuitton, Armani, and other high end stores? An unusual venue for kitefliers, indeed.

Now, before I go any further with this report, it bears explaining… This “Indoor Fiesta” wasn’t actually indoors… The idea was to showcase and promote “indoor flying” style, but no portion of it was fully enclosed… Instead, a performance area was arranged on the public walk outside of the shopping center, blocked on one end by a large facade bearing decorative kites and event logos.

While this may not have been a true indoor showing, the skills and kites applied by the attending performers were very much from the indoor school of flying and served as a fair representation to the uninitiated public… From the flier viewpoint though, there was a good deal of “urban” or “street” technique being applied… The winds very rarely stayed at zero, and instead averaged 0-4 mph at variable directions.

True, it’s not what you might call an “ideal” setting for indoor flying or outdoor flying, and this was pretty evident with the first couple demos flown by the newest arrivals… What was interesting and inspiring though, was how SO MANY styles evolved and overcame, even monopolized, on the highly variable conditions… A fantastic display of urban / street flying, using all types of kites in various combinations.

The crew I’d helped to get into this show were largely experienced urban Rev fliers already (Spence Watson, Steve de Rooy, TK and myself), but every one of us still agreed by the end of the show… It was a royal “boot camp” for flying street style, everyone on the show roster seemed to agree, despite the challenges.

Spence Watson had actually been in town for nearly two weeks before we arrived, doing another series of the same event at the HDB HUB shopping center, more of a regular Singaporean with less high brow shops and more colorful spectators… During that portion, they had Spence flying six 10 minute performances daily… After we arrived, everyone did an average of two 4 minute performances per hour, three hours per day (6-9pm).

I haven’t found videos for everyone yet, but there were some really beautiful fliers in attendance from all over the world and I’ll try to include everyone I can…

Far and away, the most commonly used kites were the Wala (from Flying Wings), the Indoor Rev (Revolution) and the Plutz (Ceewan Leong)… We also saw some other popular kites including the Urban Ninja (by Horvath), Hybrid (Horvath), Wala XL (Flying Wings), Echo (Focus Kites), Air Yo (New Tech), as well as a collection of handmade Chinese kites by Qian Jian Guo.

Speaking of Qian Jian Guo, he was our one traditional “kite master”… A brilliant kite maker from the Weifang region of China, his kites resembled planes or birds, generally flown one at a time using a fast hand spool, he was like a whirling tai chi master with his fantastic control and understanding of the craft.

Here’s the nearly complete list of performers from throughout the ION Orchard show:

We also had two different single line pairs from Thailand on two different weekends (4 Thai pilots total), at least one Malaysian kite maker and a couple of other local Singapore fliers, many of whom I didn’t manage to remember by name… Great folks all, but they were only in town or part of the ION show for 2-3 days and we didn’t have much in the way of bonding time pre or post show.

I’ve run through the main performers at ION Orchard, but I’d also like to acknowledge the efforts of both Lilian and Ruby (the primary organizers from ACT3 International), as well as their intern Vanessa who ran a ver tight ship for the last several days of the show… All around, very thorough, and it was a pleasure to work with this organization knowing their focus on community outreach, increasing public awareness of kite flying, and highlighting the positive aspects of the pastime without being cheesy about it.

This show is just one small portion of their activities… Even on the same days we were performing at ION Orchard, they had other fliers doing school presentations almost every day… A truly independent organization with no direct ties to any store or club and the community event experience to really turn a lot of people onto modern kite flying.

The actual schedule was by the hour and generally repeated three times each day to complete the 3 hour nightly engagement… Some solo performances to musical tracks selected by the individuals or chosen jointly by the improvised pairings, and some performances to LIVE music performed by a guitarist, harpist and/or flautist (flute) in varying combinations… The harpist (Magdalena) and flautist (Andy) were very well suited to the single line performances with their full and ambient sounds, whereas our guitarist/vocalist (Zal) seemed to have a real knack for creating, following and improvising tempos that worked especially well for the sport kite fliers.

Oh man, the food… Where do I even start with the food… So many delicious items, from middle of the road to barrier bending plates and bowls, the cuisine(s) in Singapore should be experienced head on… Some of my particular favorites were the Lor Mee (a light noodle soup – awesome with a touch of vinegar), Chilli Crab and Mutton Bones (marrow included)… There were many more, but those three stood out for me.

It was bloody hot and humid during our whole visit… Honestly, I really started getting acclimated after I starting imbibing local style… Local food, a little chili sauce, cooling teas and juices, lots of fresh ingredients in your meals, even a couple of Tiger beers in the evening if that’s your thing… These basics, along with a couple days of adjustment, really did the trick for me.

13 days on the ground in Singapore, 10 days of performance, 3 days of flying at the local fields, surprise visits to the kite stores, even a new national Singapore mega fly record, great shopping, great food… The best part, great friends. 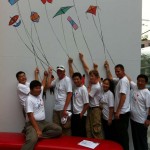 As I often find at true International events, there was a lot of good time spent “in the air” with an amazing array of fliers from various parts of the globe, a few of whom I wasn’t able to readily communicate with due to difference in native language… The camaraderie, teamwork and sense of kindship was unmistakable though, as always – a familial bond that extends beyond our native tongue or the kind of kites we fly… Something deeper and more instinctive, SO enjoyable and affirming.

One sky, one world,