Often the editor of this magazine is asking you, the membership, for help and, quite honestly, I reckon some of you guys out there could probably do a little more.

The task of filling this magazine every couple of months is frightening – not a duty I would want to take on!

One of the reasons for not putting finger to keyboard perhaps, could be that it is difficult to know what to write about. So here I will be trying to think of topics for which you need have no greater experience than others but that people would still be interested to read.

Have you ever made a kite? What got you interested in it and how did you go about getting the plans – or did you make it up as you went along? Where did you get the materials and what were the most difficult to obtain. What troubles did you hit along the way and how long did it all take. Most of all did it work? OK add a few more bits of your own type it up, maybe send in a photo – sorted!

My own experience of kite making? I tried a couple of things but got so frustrated – I don’t do fiddly – I won’t be doing it again – I’d rather be out flying!

Have you attended a good festival? How did you find out about it? How did you plan your day? Who made the sarnies or do you go for the onsite food and what was it like? What were the things that impressed you about the festival and what got up your nose? What time did you leave in the morning what did you forget to take and what time did you get back? What will you do different next time and what would you advise others?

Tell us about a kite you bought. Was it an impulse buy or was it one you have had your eye on for ages? Did you buy it on line or at a festival? Was it one you had read about in Pothecary’s corner or on our website and did you agree with what I said about it? Does it do what you expected or will it when you get the time to practice?

Here’s one more idea it’s the story of how we got in to kites – just so that you can see how easy it is to put something together.

Two questions we are always being asked, apart from those to Marilyn on how does she put up with me, are “How long have you been flying” and how did you start?

We hadn’t been together long and were still taking those romantic walks in the country.

Combe Gibbet was our choice one Sunday in 1992 – it doesn’t sound great a place where they used to hang people in the olden days but there are fantastic views across at least three counties from the top and it was there that I saw people flying some black two line deltas. Not the sort of thing that interested Marilyn at the time so I just stumbled along the track taking it in as I went, thinking that it looked pretty good fun.

We were in to road races, at the time, 10k most Sundays, and I was playing a lot of football so we didn’t get back there but the memory stayed with me.

Coming up to Christmas Marilyn said that she needed to get me another present and was there anything I particularly wanted? Remember we are back at the beginner’s stage here and knew absolutely nothing about kites at all.
“A kite?” she exclaimed “What made you think of that?”

I reminded her about Combe and said that it might be an inexpensive way to fill up the odd afternoon when it was our turn to have the kids, thinking that she could pick up a kite like the ones we saw for about eight quid in the local toy shop.

After some searching Marilyn found a proper kite shop (remember those) in a precinct in Southampton where she secured my first ever sport kite – a Generation.

I was pleased to get it on the day but couldn’t believe how much it had cost –
“Ok – I give in” I said.

“Thirty quid!” she said “thirty quid! Who would have believed that a kite could cost thirty quid! …and there were some that cost more than that!!!”

The next few weekends were pretty foggy and we knew that you needed LOADS of wind to fly a kite so not much happened for a while so, eventually we decided to go where there was bound to be lots of wind – back to Combe!

It was windy and it was cold, very cold but, we hadn’t come all the way out here….

My son, Grant, twelve at the time, had forgotten his hat so kept his ears from dropping off in the cold by wrapping the kite bag around his head. Marilyn’s daughter, now a teenager, showed the expected interest of a female adolescent and stayed in the car with a book.

We went through all of the games of throwing the kite up, crashing, untwisting and relaunching shouting instructions at each other through the biting wind before going home excited at having been able to stay airborne for at least 15 seconds on a couple of occasions.

We had to try this again. Back to the hill the following week and then, suddenly, what was I doing? The kite was staying up there! Careful analysis showed that by keeping my hands out in front and returning them to a neutral position when the kite was pointing in the direction I wanted was the answer! Follow that with a big movement back with one hand until I had completed a circle and I was away – oh the excitement – I was bitten. Now I had unlocked this secret I was able to explain it to Marilyn and she too was a master of the sky!

A few weeks later we were returning from a shopping trip passing Basingstoke when we caught sight of a sign saying ‘Kite Festival’. We couldn’t believe the size and shapes of those kites there – we were on about it for weeks after! What a pity the festival was just ending as we arrived. From our road running days we were used to picking up leaflets for other events so our next date was at Teston Bridge. It was here that we saw some bigger sport kites set up on the ground and looked to see the difference between those and our little toy. It was Mike Shaw, the guy who ran the British buggy club that came over and asked me if I would like to try and insisted I did despite my protestations about not being a ‘proper kite flyer’. After a quick demo I was given the straps – I was airborne – WOW – what is this thing – it’s fantastic! The stronger pull, the controllability – everything about this was wonderful and then, bump, I nosed it in to the ground. I was told not to worry and the kite was righted again for me but I decided not to push my luck anymore and went back to join Marilyn who had been watching, cross fingered, from afar. We were both so excited, we picked up more leaflets and it looked like Weston was our next target.

What happened next? Well. If you are interested visit Pothecary’s Corner in the next edition and I will see if the editor can fit it in amongst all the other new contributions.

This magazine is now available on line. There is a low annual subscription fee but there are benefits to membership such as discounts at some kite stores and free car parking at some events – find them on line.

We used to have a corner on our website too and it will be back when time allows.

What we try to do in the corner is to give a range of articles and reviews. Some will be purposely short, so as to keep variety and some will only be an odd line or comment that we thought someone might be interested in or might find funny – not everything that is interesting is over a thousand words long.

My son has now grown up (See earlier article) and now runs his own company called Special Media Projects and I got him to produce a couple of the videos for the “Tips” section on our website.

I gave him some wrong information but we never bothered to do a remake on his excellent clip on the Lark’s Head Knot. I always called it the Larch Loop and that’s what went on the video. I am not the only one who gets it wrong I was relieved to hear the other day when someone referred it to me as “The Lark’s Foot!” 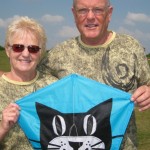 There’s a new cat, sorry kite, causing quite a stir amongst the kiting world. Going by the name of Felix Sadpuss, and befriending flyers around the globe, such as Close Encounters and Karl Longbottom to name a few, this kite is fast becoming a must see at all the festivals.

Due to his popularity, Felix has now set up his very own Facebook page, so that friends – old and new – can stay in touch and share pictures. Why not make friends on line now or better still, keep an eye out for him at your next event, and get your picture taken with this illustrious feline.

I was talking to Carl at Brighton. He was extremely appreciative of the support from the kiting fraternity which he had received through recent, troubled times. To answer all those questions, Carl will be concentrating his efforts on design in future. There is still a lot of interest in his kites, in particular the Fury and the Flow Delta. The good news is that these will be available in the near future made, under license, possibly by one of the top kite making teams in the USA as Carl is keen to keep his name synonymous with quality. This could also result, Carl told me, in the delta price being made available at a better price than before!

I was telling you about a corporate event we were invited to recently.

We had to be there early for the press and TV which meant that there was a lot of time to enjoy before the event started for real with all the free drinks, speeches etc.

I was checking over the kites we were to use when I noticed that the C-clip holding the bottom spreader had slipped down and needed to be glued back in to place.

My super glue had reached the stage where it was becoming thick after having opened the bottle a fair bit over recent weeks so I was surprised at how runny it was in the very hot weather we were experiencing that day (remember that one?). I only noticed this when I saw it flowing freely from the bottle to the ground! “Good job it only went on the grass” I thought, making a note not to put anything down there for a while.

Wrong again Allan! It had not gone on the grass – it had splashed on to my foot and I discovered later that I had successfully managed not only to stick my toes together but stuck my toes to my sandal as well! The next fifteen minutes of preparing for the event were spent gently prising my toes apart and detaching my footwear followed with my good lady peeling off lumps of glue from my ticklish feet. We have got some anti super glue liquid somewhere and, recently, someone told us that cola works well too.

I hope somebody else can tell us if that’s true because we would rather not go through that again just to prove it!