Some days it feels like I spend all my time fighting fires when what I really want to do is make and share kites, and relax occasionally with my wife. Fact is that I haven’t touched a kite all week. So though it may be a bit boring, I thought I woulkd share with you some of the challenges we’ve spent our time on recently.

Oregon State Parks doesn’t have enough money. So they are proposing rules to “better manage” public use of our beaches. The rules basically say that groups of people need to get permits. This not only affects large events, but also weddings, family reunions, and potentially, a bunch of friends that want to fly kites together.

Permits require a 10 day application process, a $100 fee, and proof of insurance. Insurance. Ugh! Business and non-profits have event coverage. But if a family wants to purchase a rider, it can easily cost $1000.

In the past two days, I’ve reviewed the proposals, sent letters to State Parks, my legislators, and the Governor. I’ve contacted local newspapers and Chambers of Commerce. And I’ve networked with local kiters.

One part of the proposal I particularly like is the requirement that events “adjacent to a body of water” must hire certified lifeguards. And last time I checked, the Pacific Ocean is a body of water. So yes, kite festivals, volleyball tournaments, and sandcastle contests now need lifeguards…

For more information on the rules changes click here. Comments may be emailed to richard.walkoski@state.or.us

A few weeks back, I reported that some friends flying larger kites on our local beach were told by park rangers that they were generating too much attention and that the parks couldn’t keep up with trash and toilet issues. But a week later, the conversations changed from toilets to safety. (Funny how that happens!) Seems large kites may be unsafe. But what is a large kite?? According to State Parks, a kite that is anchored is large.

Just before the recent Lincoln City festival, we were told that fliers arriving early were not covered by the weekend permit and could be cited. I called our legislators and eventually the permit was extended.

I also took a kite to the beach Thursday and flew it without an anchor. In fact, I shared the line with some visitors walking by. Here’s a shot of their 11 year old son — on crutches – flying a 120. Since he has no anchor, he must be safe…

Personally, I think that the kite “safety” issue is a result of the problem discussed above. Parks doesn’t have money and is reacting by limiting beach use. (Note that the permit rules were written before our friends were confronted on the beach.) My response is to urge the city to help maintain our beach wayside and deal with toilets and trash.

We have a meeting scheduled for mid-November to talk though these issues. If email follow-up is needed, I’ll let you know.

Mr. David Gom: Just when you thought the stuff was running so deep that your shoes were a loss and you hoped only to save your watch…

Readers on FaceBook have probably noticed a number of posts by a Li Lei in Weifang. He is posting pictures of inexpensive kites for sale. And many of those kites may look familiar. Li previously worked for Fortune Comes Kites who were criticized for offering kites designed by other firms like Into the Wind. In fact, you could visit their site and find photos lifted from the ITW catalog and featuring the kids of ITW employees.

So this week, Li reports on FaceBook that he has just sent a large shipment to a new American account. The happy buyer? A Mr. David Gom.

I responded that readers should know David Gom is not David GomBERG and that I don’t do business with Li. The discussion got interesting before it suddenly disappeared. Here are a few excerpts from the public posts:

i never do kite business with you before. david Gom is not you. he is from taiwan and live in nw now.he is just a smaller seller in his own house

but he is poor.and he make it out to sell.but month later rev family said that he copy them.so he is just his ownself.rev has so much money and has so many people !but i really feel sad for america.this is just what i want to say.but i think other american people is kind like you.

i dont want to explain anything for you. i have sent you so many email.you should know and understand the world kite much more.so dont do something hard to me.i never done something wrong from you.just try to do something good for you.but no any reply.so now dont tell anything ,just be quiet!i really can’t understand why you are president of kite in america.america is fair country.now i really think your country is much more unfair.just life for rich white people!!! 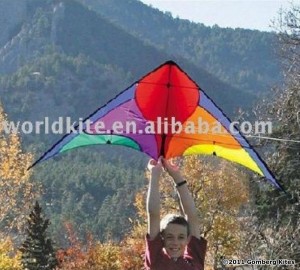 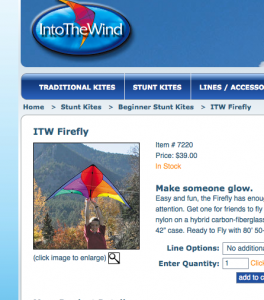 ORIGINAL: Into the Wind FireFly

While I have my suspicions, I can’t say for sure whether David Gom is real or not. I just don’t want people being confused or mis-lead and thinking I’m buying these imports. Check out Li Lei and David Gom on FaceBook and see what you think.

[box type=”alert” style=”rounded” border=”full”]Editor’s Note from 1/15/12: Shortly after this article was published, Li Lei’s profile on Faceboook was deleted due to confirmed trademark violations against Revolution Enterprises which were submitted via Facebook’s Intellectual Property process, it took less than 24 hours from when the complaint was filed… Another win against copy kite manufacturers, an ongoing concern for kite makers and companies worldwide.[/box]

Susan is an advocate for animals and once served as President of the Humane Society in Salem.

Two years ago, our county sheriff announced that funding cuts would force the closing of the local shelter he runs. Big problem! The public responded by funding a 5-year operating levy. And now we’re having intense discussions about how the money can best be spent.

Earlier this month, I testified to the Country Commission. I observed that law enforcement was focused on catching bad guys — and that is how it should be. But a consequence of that was the Shelter was not a priority. Meanwhile, we have the Shelter staff, the local Humane Society, and the Friends of the Lincoln County Animal Shelter — all doing good work and all rubbing each other the wrong way. I suggested the County get everyone at the same table and working together.

Meanwhile, Tuesday, Susie and I fly out to South Africa where we’ll be working with kites and kids in the townships outside Cape Town. Then we perform for the Cape Mental Health International Festival. It is one of our favorite festivals and causes.

Have fun and we’ll see you on a field somewhere soon!