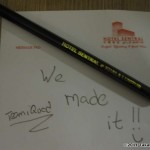 Last year, if you go back through the Kitelife issue archives, you will find two stories I wrote regarding my trip to the Borneo International Kite Festival, the 6th annual running of this festival. When I left last year, I’d made a promise to a few of the Bintulu flyers that I would do everything within my power to bring all of iQuad back for the next year. And you know, it took pretty much an entire year to make that happen but, sure enough, 6 of us took off from Vancouver to head over to Malaysia on Sept. 14th. The trip itself took 8 flights across 5 cities to complete, with a stop in Singapore to run the first ever iQuad clinic in Asia (see last month’s Revisions article for more on this) with the next stop being Kuala Lumpur.

Kuala Lumpur (or, KL as it’s commonly referred to by it’s residents) was to be our first “rest” stop, acting as a break between the clinic in Singapore and the 7th Annual Borneo International Kite Festival over on the Borneo island, a few days later. We arrived mid morning after a short flight back from Singapore and managed to get ourselves onto a bus that took us a mere (long) block from our hotel, situated pretty much dead center in downtown KL. Mere blocks away from Chinatown and Little India, this proved to be an ideal location with plenty of food and shop options nearby.

After a quick settling in and a drop off at the local laundry shop, it was off to get a look at the city. We were met by my stellar companion from last year, Mr. Chris Tan who with the help of another local flyer (Hi Azihar!) managed to take us down to a local shopping area chock full of local crafts and gifts. We also met up with Penny Lingenfelter who’d be with us for the rest of our trip. Always better to experience such a place with friends! 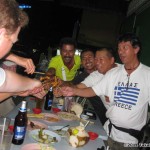 The plan for the evening was simple. Devour as many sticks of satay as humanly possible with a good sized group of the local KL flowers. The neighborhood we were in is toted as being the birthplace of satay and wow was it delicious! We managed to devour a small bamboo forest of sticks between the group of us and for dessert we tested out a set of handheld lasers up against a building to see how they would work as a practice method for the team. Our verdict? A great approach provided it wasn’t too light out. One our way back, we endeavored to find some durian for John to try out (to no avail) and a stop to check out the Petronas Towers around midnight. These used to be the tallest buildings in the world, and I think they are still in the #2 spot. They are a beautiful site to see at any time of the day, however in the evening, they glitter and shine and you can see them from miles around the downtown. Our plan was to scout possible spots to fly in and around the towers at some point during our visit. Monday was certainly what I’d call a full day, by the time we got back to the hotel we were all utterly exhausted.

Tuesday rolled around and after a leisurely start to the day (coffee and kaya toast at the local Old House White Coffee place, the local equivalent and vastly superior version of Starbucks in KL), we were set for another day of adventuring. On the morning’s agenda was a trip to the Batu Caves, just north of KL.

When my wife and I had visited last year, I got an idea in my head that it may be an ideal place for some indoor flying. John and Chris Tan went off to negotiate such an idea (you want to what in our caves?) and with a little luck and good dialog, permission was granted. What an opportunity! The indoor Revs came out and we all got a chance to fly inside this amazing space. Truly a memorable visit to this complex. People were bewildered as we guided the kites through the caves and outside near the base of the massive statue of Murugan. We managed to capture a lot of video of this which will see the light of day at some point soon.

After a quick stop for some true Malay food on our way back from the caves, we stopped at a small park just outside of downtown, one of the favored local flying spots to try and get in some practice on short lines, with a stunning view of downtown KL in the background. While iQuad got some flying in, Penny managed to teach a small group of children how to fly one of her indoor Revs. It wasn’t terribly windy at this particular location but, it was certainly good enough to get some flying in. Next stop, the base of the Petronas Towers to try and get some street flying in there. We were somewhat successful with this, however, usually about the time the tower security would see a kite go up, we’d usually find ourselves moving off elsewhere to try again. Fun, but, not as much fun as we had hoped for but, you make do with what you get. An early evening dinner at one of the Indian restaurants within the Little India section of KL and once again, we found ourselves utterly worn out, ready for a good sleep before heading over to Bintulu the next morning.

After a quick repack of all of our stuff, we headed back out to the Kuala Lumpur airport, this time with the island of Borneo being our destination. Upon getting to the airport we found it overrun with other kite flyers. The afternoon flight to Bintulu had more than 60 kite flyers on board from around the world. Good thing the plane didn’t go down! With over 100 flyers and 30 countries represented, I’m sure a couple of flights had a good collection of flyers on it, and an awful lot of kite bags. We arrived in the early evening and after a short bus trip into the town, we had made it! I confess to being a little overwhelmed at this point. After a years worth of work, we’d finally made it back to the festival that I had so enjoyed the year before. I breathed a huge sigh of relief, cracked open a wide smile and Bazzer and I went off to find our room. When we came back down to the lobby, the organizers had unveiled a long banner, celebrating iQuad’s 100th festival, in it’s first five years. You could have knocked us over with a feather, it was such a great surprise and a big honor as well. Then I really did get a little overwhelmed.

Nothing was really on the agenda for the evening besides a meeting of all the flyers with the organizers, a pre festival meet and greet where the countries and people involved would get introduced and a rough guide to what was happening during the next few days was shown to us. It looked like a busy few days but, a really enjoyable time as well. The festival organizers were certainly more organized this year, they had all the information one would need readily assembled and all knew where they had to be and when they’d need to be there. The next day would involve a visit to a local native Longhouse and a large fighter kite competition in the afternoon. Sounded like a good restful day to me!\

After a breakfast at the buffet the festival sets up every morning for the flyers, a large contingent of flyers piled onto a handful of buses to take the trip out to the country side, to visit a longhouse where the local native people, the Iban, make their homes. They showed all of us some examples of the work they do and put on a demonstration of some of their dance and music traditions.

After sampling some of their home made rice wine and participating in some local dancing traditions, it was back to the hotel for us, and eventually down to the field. The festival itself is held on an old airport runway, the airport itself used to be the only airport in Bintulu and was in the Guinness book of world records for being the closest airport to a downtown core in the world. A map below shows you just how close it is.

We had thought the sole activity for the afternoon was to be a fighter kite competition, so our plan was to bring down the Revs and just have a loose afternoon of fun flying, and some of us had signed up to be fodder for the fighter kite comp. However, once we were down there, it was announced that there’d be demonstrations by the teams that were there, namely us, Team Air Rex out of Japan and Airnergy from Singapore. We were somewhat unprepared for this, with no radios, no music and next to no preparation. While all of these things could be easily dealt with, there was next to no wind either, making it extra difficult to mount anything resembling a respectable fly out of the team. All in all, it made for a rather disheartening afternoon in that respect, having really never gotten a break from the wind the entire day. But, that’s how it goes sometimes as anyone who’s been to a festival will know. But, Steve Re Rooy and I fared somewhat better in the fighter kite competition, with both of us making it through the first round and into the second. After this however, we became the fodder we figured we’d be.

The evening saw the organizers throwing a small party on behalf of iQuad, marking our 100th festival, at a local Chinese restaurant. More than 60 flyers attended and there was much merriment and celebration with prizes under all the table cloths, a trivia contest and as a final nicety, John gave away a Rev B Series package to the youngest flyer who did not own an actual Rev. Pretty sweet prize!

For what happens over the next few days, pop back for the next issue of Kitelife, where I’ll get into the actual festival as it happened over 3 days…