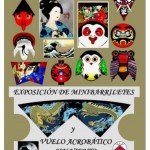 It was a great satisfaction to Claris and me to be invited, like year before at Environmental and Cultural Japanese Garden of Buenos Aires, in order to do a Japanese Kite Exhibition and flight demonstration.

This year we make new models of Japanese kites, minis and normal size.

Claris surprised us with their creations again and in particular, despite that it is not my specialty making kites, I’ve felt motivated to venture into this practice.

The exhibition and workshop:

It was held at the Chrysanthemum room, today it has renamed as Tokushima.

On November Sunday 13th, we went at Japanese Garden In order to do our tasks.

Claris started the workshop at 3:30 PM explaining to the large audience what is their vision and motivation to do their jobs.

“When I started studying Japanese kites, amazed me at first, to discover the wide variety of presentations. More than three hundred models, which could be found in Japan´s territory.

I was surprised by certain qualities, so stripped of ornamentation, showing that beauty is not only in outward form, but in so quietly expressing their details.

Its materials, paper and bamboo for their frames, paintings, perfection craft retailer in the management of them, reducing and simplifying the design elements seen in the kites; from neighboring countries that were centuries ago, their sources.
When I was in Japan, I could found, Bamboo of 180 years old, unaware papers, which transported me to discover another culture and filled me with emotion. I welcome the unique way of conceiving art by Japanese people.

The emotional effect on aesthetics that provide these artists artisans and that translates fully what they create. They can build giant kites from even the smaller ones, with equal detail. Its construction and operation is a part of his life and his communication with the surrounding environment. I can say that I am eternally grateful to my great masters Hiko Yoshizumi of Kyoto and Hamamatsu Heizo Itoh”.

If you had had the opportunity to see Claris’ jobs, I dare say that Claris has honored his Japanese master’s teachers. From my point of view his kites are a unique works of art.

From my creations, here are my 4 modest models of traditional Japanese kites, which have been built with modern materials. Those are: Hata, Suruga, Yakko and Kerori.

Maybe you are wander; why I made those kites models?

Because I note that is interesting the historical origin of these: 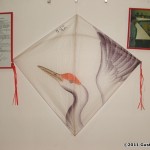 Nagasaki was the first place where Dutch and Portuguese traders visited Japan in 1600 with the intention of making contact. It was a natural port for foreign ships, which was administered briefly by Jesuit priests. In 1639 the port is closed to foreigners – mostly Christians – fear to take control of Japan. Despite that was the exception of Dutch and Protestants boats that which were allowed. Only in 1854, the port is reopened without restrictions.

HATA is a fighter kite made in Nagasaki Prefecture, Kyushu. Its shape is not like other traditional Japanese kites because that was imported from India. Obviously Dutch boats were the natural way of imported.

Hata kite have not fins and tail, like Indian kites. The edges are supported by a thread, are painted red, white and blue style like Dutch flag.

It is an excellent and maneuverable kite, capable of flying at amazing speeds with good directional control. Has a pair of stabilizers on the sides that also serve as decoration. 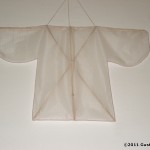 Yakko-dako is one of the most popular kites in Japan. It is very difficult to fly without tails, then children put them and their length varies from 2 to 4 meters. They are made with newspaper or other similar roles. Yakko was the servant of the Samurai that carried spears, paving the way for its passage. 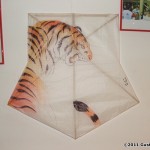 In early 1500, the Shogun´s Suruga Castle – Imagawa Yoshimoto – Design and flew a kite as a sign of victory after having fought in battle. In particular it is customary to fly it on Children’s Day in Japan.

It is rectangular in the top and is tapered at the bottom, simulating an open-tipped arrow or gills. For stability requires tiles to be flown.

Suruga-Dako, can be made from a square piece of paper without making cuts. This is done in the prefecture of Shizuoka. 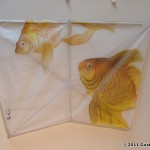 KERORI, has a curious shape and requires tails to fly. He is originally from Aichi Prefecture. I remembering Revolution kite´s shape

We have also exhibited two Rokkakus kites made by modern materials.

Rokkaku kite it means hexagon, is very famous in the world for its excellent flight characteristics, stable and simple design. Sanjo is the birthplace of Rokkaku, in northern Niigata prefecture in central Japan.

This time, has again, painting Hata, Suruga and Kerori.

His works convey originality, creativity and perfection combining Argentina´s look with the techniques of an ancient culture.

Of the latter task, I enjoyed painting the tiger, because I could use the spatula like a brush to slump. That is, achieving spontaneous execution, agile and “no thought” or “no mind” to be looking at that kind of Japanese style. The brush and the ink must flow through a sheet of rice paper, in this case; through the kite sail. I did despite the different materials that are required.

You can see that Pablo feel great to achieve the same effect, using non traditional materials of paint. That it was possible thanks to his skills that my friend has.

A full sun and challenging weather conditions, did my show flying my Revolution Nihon-no-ryu over the audience. This time the place was the Magnolias’ courtyard.

That place is exposed to the wind; that blew from North quadrant at 30 km / h. A strong turbulence and rebounding on the canopy trees allowed my kite, sail through the air by taking advantage of different currents wind.

The Revolution Nihon danced in time of “Arashi,” the piece of music which means storm, performed by Medetaiko Japanese drums.

As you can see, Nihon still beats to the rhythm of Taikos.

Medetaiko´s (http://medetaiko.blogspot.com/) name is a pun combining “Medetai” Happiness, “Taiko”, name of Japanese drums and the art of execution. The idea of ​​happiness refers to the concept with the joy that comes of inner development of man rooted in Japanese stocks.

The group was founded in 2002, is one of the first groups to build their Taikos and create your own topics. In a spirit of camaraderie is distinguished by merging the “Kumidaiko” or drum assembly with the “Eisa” or traditional Okinawa´s dances.

As you can see, the Zen look is still alive like the cultural message.