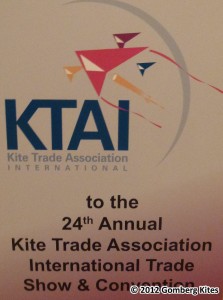 The Gomberg Team has just returned from the Kite Trade Association Convention in Las Vegas.

KTA is an unusual gathering. To begin with, it is a closed show. The public, or kite fliers for that matter, are not invited or allowed to attend. And that is as it should be. The purpose of the program is for wholesalers and manufacturers to present products to retail store buyers. Business information is exchanged, negotiations are conducted, and deals are cut. And that is not something that customers or friends should properly be involved in.

That being said, I completely understand why enthused fliers would want to attend. Everyone is interested in the buzz and wants to see the coolest new designs. And in fact, it is not unusual for stores to bring select customers as part of their delegation, or for enterprising fliers to file a business license and register for the show.

And invariably, I think, those people are disappointed. Years ago, KTA featured a wealth of designs, imports, and innovations. One hundred booths would include four magazines, craftsman like Reza, Martin Lester, or Logo Kites of Europe, and firms competing to show the most cutting edge sport kites. Now the focus is on mass appeal kites for the surviving retail kite stores. The most interesting thing about the show for outsiders is wondering what is going on inside.

That’s not to say that the program isn’t worthwhile for the business folks. The orders they place, the information they share, and the relationships they build are critical for success in an increasingly challenged kite industry. I’m just saying that you shouldn’t feel bad for missing it!

So — a week before the show, I read on one of the popular kite forums that all of the big kite companies would be at KTA — Premier, New Tech, HQ, Prism, Revolution….. I kept waiting. Guess we weren’t “big” enough to make the list. But then, neither were quality acts like Into the Wind, or the most successful company with the biggest display in the room, In the Breeze. Trust me – – we were there.

Moreover, GKPI is delivering product. There are larger firms in the game with broader offerings. But in terms of mainstream product for the mainstream retail store, we ship 90% of orders within 48 hours last year. By contrast, our own NorthWest Winds stores received some trade show orders from last January in November!

Delivery schedules, cost increases, delays and safety inspections by US Customs, and design infringement remain major issues for our fragile industry. I’m constantly asked why we don’t make our products in the USA. I wish we did! We’ve looked into production options and just can’t find a scenario that works — for much the same reason that your shoes, shirt, and jeans are all made overseas…

There were about twenty sellers at the show this year and about forty buyers. At the end of the three days, awards were presented at the banquet. Second Wind was named Retailer of the Year and In the Breeze Best Manufacturer. Ocean Shores had the Best Kite Festival.

I’m genuinely pleased for the award winners. But secretly, I wonder how many of KTA’s voting members have ever seen the beach in Ocean Shores or toured the Second Winds store in Bodega Bay. So this year I’m announcing my own awards….

Check out my walking tour of the Trade Show!

As I said before, KTA remains a fine opportunity to exchange ideas, product tips, and trends among retailers. The networking there is worth the registration and travel costs.

Susie missed the show this year because of some unexpected eye surgery. (She’s doing fine, thank you!) I dodged 100 mile winds on the coast, falling trees that closed highways, snow, flooding, and delayed flights to get there. But we’re all home now and furiously typing orders into the computer.

Another container of kites is due here Wednesday and we’re wondering where to put them all. Oh, and the Governor is coming to speak at my campaign kick-off Saturday. Can’t wait for spring when the pace picks up….