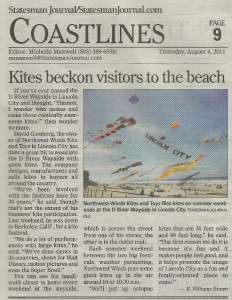 I’ve used several of these pages to keep you informed about developments in the Oregon Parks Administrative Rules which could affect kite flying on our beaches. I think this stuff is important for those who fly here, have fiends who fly here, or who fly other places where such regulation could spread.

At this point, the entire matter seems to have been satisfactorily resolved. A few more public hearings on wording we are happy with are all that is left. Here’s a quick overview of where we started and how things ended.

Lincoln City officials, the Mayor, and Gomberg meet with state park managers to question the proposals. Kiters respond with letters and phone calls. Several kiters appear at public hearings around the state. The Division 16 proposals are withdrawn to be “re-worked”.

Gomberg is appointed to a 10 person advisory committee to comment on the proposals. The group spends two days reviewing 24 pages of rules and then a second draft is prepared. In the second draft, all mention of static kite flying is removed. Instead, beach users are expected to be responsible, act safely, and be respectful of others. Parks officials verbally concede that until or unless there is an accident, they will not require permits for small group or informal kite flying. The rules state that permits are needed for groups over 50, or situations where portions of the beach are marked off, sound systems are used, or tents erected.

Public hearings are now scheduled. Gomberg appeared at one Monday night in Newport to thank Parks for the changes and clarifications.

Hearings are scheduled for late February on Division 16. 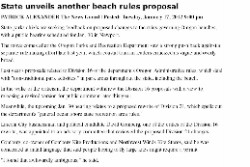 Bottom line, Parks has listened to our concerns. Under the proposed rules, we don’t need permits for kite flying. Everyone is better off. And a significant threat to kite recreation has been averted.

We still need to act responsibly, which all of us advocate anyway. And a serious accident in the future could jeopardize this balance. But kite accidents should also be weighed against other accidents involving horses, cars, sand holes, dogs, and everything else….

Thanks to everyone who participated in this effort.