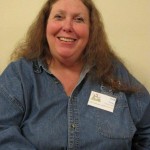 I jumped into kiting with both feet in 1984 when I attended my first American Kitefliers Association (AKA) Convention, in Nashville, Tennessee, and saw all the amazing people and kites that “you don’t see in magazines.” I took a second leap when I attended the Washington State International Kite Festival (WSKF) in 1986, still in its infancy, but one of the premier kite flying events in the country. Taking a bag of kites that included a Dan Leigh Delta, some Vertical Visuals Rollers, and a patchwork kite or two of my own, I was again treated to meeting people with a passion for kites. At these events, there was one person who made a lasting impression, and is still active in the Northwest kite scene, Deb Cooley.

Sitting down with Deb at this year’s Oregon Kitemakers’ Retreat, I found that she is in her 33rd year of kite making and that 1986 was, as I thought, a “breakout” year for her as a kitemaker. The kite I remembered from that year was a large black delta with an appliquéd detailed rose motif. It was impossible to miss when it flew, and it constantly drew your eye. Reminiscing, Deb said that it was one of her first large kites and it cemented her place in the Northwest kite scene. After this, she began making multiples of her designs, and before she knew it, Deb had a small cottage industry business. People wanted to buy her kite designs which were available up and down the west coast of Oregon and Washington, in beach kite stores, at kite festivals 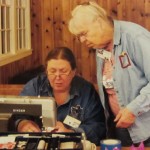 and at Saturday markets. Ten years of production flew by. She developed an applique sewing technique that made her kites stand out from the mass-produced kites of the day and which could be produced at reasonable prices for children or adults. Her kites were engineered to fly flawlessly!

“Selling kites to Catch the Wind (an Oregon coast kite store) really started a chain reaction. I realized that I didn’t want to be an average kitemaker. My goal was to be one of the best. I changed the techniques I used for appliqué. Hot cutting the designs out gave a much cleaner look to the kite. And one of the first designs that I made is still one of my most popular (Rose Delta). There is no limit what you can do on a kite skin.” (Interview with Deb Cooley by Ali Fujino, Drachen Field Notes 2011)

I was interested to hear that after just a year or so of making kites (probably 1979 or ‘80), she was visited by none other than Lee Toy, who, on a motorcycle trip across the US to locate kitemakers, he sought out and found Deb, at her home on the Oregon coast. She was charmed to have her work noticed by such an important kitemaker! 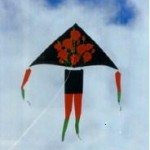 I have always felt that her applique technique makes her kites and windsocks bold, memorable, and instantly recognizable (as her work). She depicts scenes familiar to visitors and natives of the Northwest: birds, fish, ocean sunsets, and beach environments. She has the artistic talent to take detail out, instead of adding too much, and this gets her messages across clearly and completely. I suspect that this ability helped to make Deb’s kites and windsocks affordable in those years when the general public thought $50 for a kite was shocking.

Deb has been involved in every part of the Northwest kite scene; teaching at Washington and Oregon retreats, participating in AKA Conventions, working with local kite stores, and volunteering or selling at festivals up and down the coast. She has taught her style of applique to hundreds of people over the years and has second-generation customers coming back for her most recent work. Her infectious laugh and constant good humor keeps the rest of us in the right mood to contribute positively in whatever context. With partner Ken Tumminia, an experienced hand in every part of the kite world, Deb is free to create and produce kites, windsocks, and banners for customers worldwide. In the years that I’ve seen her at kite workshops, she enjoys learning new techniques and new kite designs and makes everyone around her a better student. She is always willing to help solve a problem or make what others do better. Never one to hold ideas to herself, she is a sharing mentor to numbers of kite makers and designers. She is great source of knowledge of the Northwest kite scene, ready to tell about Dave Checkley, Jack Van Gilder, Doug Hagaman, Harry Osborne, and all the others, who helped make kite flying a recognized pastime for adults as well as children, instead of the other way around.

And the best part of Deb Cooley is her “you can do it!” smile and her barrel laugh, which makes any person a convert to kitemaking.