If you are to go to any indoor kiting event in the world, what kites would you expect to see? You’ll see some Revs, an Echo, and maybe an iTrix. Lately, you will also see a bunch of gliders including the iFlite, the Zen glider, Plutz, Wala, Skate, Urban Ninja or Horvath. Gliders have slowly become arguably the most common indoor spectacle. With such a wide variety, each glider has different flight characteristics, and some allow for just about anyone to fly them.

What I think makes gliders so popular is how easy it is to get started. I have a prawning rod that I use with my iFlite to give myself an extra couple feet of arm length. With this set up, I can hand the kite to just about anyone, and they are up and flying on their own in an instant. There’s no complication about which line to pull to do what. All the controls are intuitive. Some of these gliders are so easy to fly that it can be done from a chair.

My personal favorite type of gliders are the light easy-to-fly ones, like the iFlite, Zen, or Migi. These gliders are very light weight, and can be flown with ease. They are very graceful and fun to play with. Because of the way the fabric moves in the wind, I think these are some of the most beautiful indoor kites.

[box type=”info” style=”rounded” border=”full”]Editor’s Note: There is an active discussion on the KiteLife forum regarding popular glider kites so be sure to add your vote, post and suggest any that are missing![/box]

One of the first indoor gliders was the Neslon Borelli Fighter kite. This is a kite that was never made commercially available, but was instead a kite that would be hand made by those who wanted it. To build one on your own try looking at this link, or view the full plans in Spanish.

I personally own an iFlite, and I love it. This kite is made by Patrick Tan in Singapore. I’ve flown this kite on a stick for a demo at Long Beach, and I’ve even flown it on sixty feet of line in an airplane hanger. It is very versitile and fun to play with.

John and TK Barresi are very fond of their Zen Gliders, designed by Sunny Lin and made by Daryl Yeh in Taiwan. These gliders are amazing in flight. Very slow and graceful. When flying, it feels as though you could let go of the line, get some coffee, and come back to resume where you left off.

The Plutz, designed by Chee Wan Leong is a kite that I started seeing just in the last year, and has now been adapted to the new Prism Zero-G under license. This type of kite has a very unique kind of structure that gives it an interesting feel compared to other gliders. Having flown a Plutz on a rod, I noticed that the kite has a fantastic glide, and it will turn very easily. The way this kite flies, can be very nice and smooth, but it also has a unique characteristic where it almost flies in straight lines, while making sharp corners, sort of like flying a box with a sport kite. This is something I had never seen in a glider before. 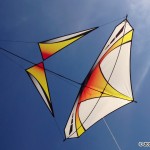 Conceived in collaboration with celebrated Malaysian designer Ceewan, the Zero G concept was inspired by Reinhold Platz, chief designer for the Fokker Aircraft Company after WW1. Decades before the modern hang glider, he built and flew a full-scale canard-winged craft that folded up to carry on a bicycle. With small wings in front, the canard configuration allows a virtually stall-proof glider that will float eerily in a level attitude even when it’s barely flying forward. A clever dynamic bridle adjusts the angle of the forward wings in flight according to the tension on the line, allowing the kite to behave as a kite under tension and a glider whenever the line is released.

The Wala is an indoor kite that has been around for a little while. I found this kite to be particularly popular with the indoor fliers of Singapore. This is arguably one of the more difficult gliders to fly. It does take a bit more work to keep it going, but it does have one very unique capability. As I had seen from Patrick Tan in Singapore, the kite can be forced around a large back-flip by giving the kite a forceful and well-timed tug. This absolutely shocked me the first time I saw it.

The Skate is a long-time popular indoor glider designed by Paul DeBakker. I’ve seen this kite since I began flying indoors about four years ago. With some practice, this kite can be very precise. I remember one particular instance with Bud Hayes knocking pop cans off of a bench. This kite can take a bit more work to fly than the super light gliders mentioned earlier, but it is a favorite among the indoor kiting community.

While Paul originally produced the Skate through Focus Kites and they haven’t been regularly available since Focus close its doors, we can confirm 100% that Into The Wind has secured licensing with Paul to have the Skate, Echo (indoor dual) and Hydra (outdoor dual) sometime in the near future… No news on the larger Skate-style design (called the Manta) yet, sorry.

The Horvath from HQ is another indoor kite that I saw for the first time this year. I saw this kite flown by Danny Lau of Malaysia. When flying in a large indoor space, Danny was able to get this kite flying above the third story balcony. I’ve never flown this glider myself, but Danny sure put on an impressive show with it.

The Urban Ninja is a glider that is specifically built to be flown in an urban setting. This is one of the most maneuverable gliders I’ve seen. While the kite is commercially produced, its kite plans are open to the public so that people can make their own Urban Ninja.

The Chiroptera, by Will Sturdy is a new glider that almost appears to be a mix between the Skate and the Urban Ninja. This is one that I have yet to see at a local event, but from what I can find, it seems to have a fantastic glide, and is able to turn very quickly. I look forward to trying one out in the near future.

Those who know me might wonder why I am doing an article on gliders. While I’m known to pull a Rev out as my first choice, I have been known to dabble in other aspects of kiting now and again. I have found gliders to be a much more relaxed form of indoor kite flying with little effort or frustration.

Because gliders are relatively cheap and easy to fly, they have been readily gaining popularity. Be sure to check out the Glider Geeks group on Facebook. For the first time just this year, I have seen indoor mega flies with both the iFlite and the Wala.

All the gliders mentioned are available through most of the kite shops listed in our sponsors section to the right.