In 2005, a kite flier named Terry Cornell (known by his friends as T.C.) dreamt of building a regional sport kite competition with an emphasis on training novice sport kite competitors (not to mention giving T.C. an excuse to exercise his newly-gained web editing skills to create a web site for the event!).  The Richmond-Washington Sport Kite Championship (RWRSKC) has since become a great learning tool, not only for the novice fliers who have started their competitive career there, but the organizers as well.  T.C. moved out of the area several years back, but over the past several years under the leadership of Laura Stonestreet, the organizers of RWRSKC have refined the event to create a new template for novice-mentoring regional competition. 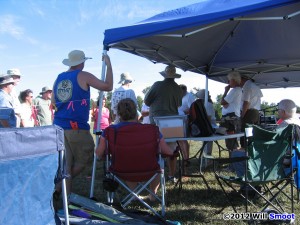 For the past few years, RWRSKC has run under the most fundamental teaching format:  “Hear it, See it, Do it”.  To start the day, novice fliers are invited to pair up with an experienced or masters competitor for “Flight 101”, an hour of instruction.  What is taught is determined by the novice’s skill level.  Sometimes it’s the most basic flight instruction, sometimes it’s a specific skill such as a two-point landing.

The competition is held in 3 stages for each discipline.  There’s an open competition that allows the novice flier to see how the competition is run, which also allows the experienced and masters “mentors” that show up to get some AKA points.  Novices are encouraged to shadow-judge the open event.  Then, an extended pre-flight briefing is held to make sure the novices have an understanding about setup times, boundaries, the figures, etc.  For precision disciplines, open and novice competitors all use the same 3 figures, which provides the novices the opportunity to see how they should be flown.  Also, despite the popularity of the Program Precision format, the open competition is held using the standard precision format so that novice fliers see the format in which they’ll be competing.  This process is repeated for the four individual disciplines.  In order to keep the schedule flexible, the only disciplines run at RWRSKC are individual dual-line precision and ballet, and individual multi-line precision and ballet.

That flexibility of schedule proved to be a big asset at this year’s RWRSKC, held on September 15, 2012.  In the current sport kiting environment, most competitions are lucky to have 2 or 3 novices show up to compete.  On the East Coast, we’ve adopted mandatory pre-registration for all non-novice competitors so that we have a clear idea of who’s coming to an event to better manage scheduling and staffing.  RWRSKC 2012 was scheduled with an expectation of having 2, maybe 3 novices show up.  We were (happily) shocked on Saturday morning to see 6 new competitors on the field!  It was challenging – we had to scramble a bit to get the novices paired up with a mentor, and the day’s events ended up being far behind on schedule, but for the best possible reason.  Instead of finishing at 2:30, we ended up doing an awards presentation (award = hearty pat on the back and a certificate) at around 5 pm.

…we expected 2 (because they had pre-registered) but had 5 walk on. At the end of the day they said the best part of the day was the hour of one-on-one mentoring by seasoned competitors, and second was all the sharing and explaining at each step in the event. The day started with the hour of mentoring, then the novices would watch, and shadow judge a discipline, then they would compete against each other. We did dual-line precision and ballet, and multi-line precision and ballet and at the end of the day it was very hard for everyone to leave because we had such a wonderful time.

While we’ve tried to make RWRSKC a model that can be easily (and cheaply!) duplicated, it has to be said that we’ve been extremely lucky with the event.  Inland locations are always a risky proposition in regards to wind, but it seems like we always have some wind for the competition.   RWRSKC is also lucky to have a great infrastructure to work from, mostly thanks to Terry Murray and Kitebus Festivals, who basically carries a complete kite festival wherever his trailer goes.  RWRSKC has also been blessed with great sponsors Flying Smiles Kites and It’s a Breeze Specialties.  We’re also lucky to be supported by two great kite clubs, the Richmond Air Force and Wings Over Washington.  Of course, the coolest thing about RWRSKC now that it’s gone on for 8 years is that we’ve now got folks who started their competitive career with RWRSKC that come back every year to mentor the new folks!

In my roles as (former) Eastern League Commissioner and member of the AKA Sport Kite Committee, I’ve spent the last several years working on the “sport kite problem” of dwindling competitor numbers.  While I certainly don’t claim to have the answer, I firmly believe that novice-mentoring regional competitions like RWRSKC are at least a part.  Over the past several years, nearly all of the new fliers in the AKA’s Southeast region have started their competitive career at RWRSKC.  During that time, the Southeast region has also led the nation in the number of new competitors.  While many novices never advance past a competition or two, we’ve also enjoyed a number of competitors who have continued competing.  There are currently several Masters class fliers whose first competition was RWRSKC.

I’m a computer geek now, but I started out from college working sales jobs, where I was taught about the all-important “numbers game” – you’ve got to go through so many “no’s” to get to a “yes”.  I feel the same applies to sport kite competition – in order to get more competitors, we’ve got to offer more easy opportunities for them to compete.  What would happen if we had 10 novice-mentoring events like RWRSKC across the country?  What if we got 2 or 3 novices to attend each of those events?  That’s 20-30 new competitors nation-wide per year, and if 6 or 8 of those continued to compete, that’s 20 or more competitors in the experienced and masters classes over the next few years.  Not huge, earth-shattering numbers, but enough to make a significant difference in the current environment.  New fliers generally aren’t going to travel long distances to “try out” competing, but if a bunch of these events could be put on across the country, who knows what we could accomplish?