In my last article for KiteLife I wrote about the importance of not plagiarizing original designs of kite makers (at least not without permission!) but this month I am making a case for learning from replicating archival designs that are part of the public domain.   I’ve made it a point to avoid making this column a “kite making” forum, but this month, as an early Christmas gift (or perhaps a late Halloween curse), I thought it would be fun to look at some obscure historical kite designs and think about how we might bring them to back to life in the 21st century.

I’ve chosen a variety of designs, most of them in some way cellular even though they are a far cry from the standard Hargrave style.  But let me start with a flat kite, one that I’ve had personal experience with.  It’s a three-stick variant that I first saw on a French postcard and was proposed as a lifter for early 20th century camera equipment.  I’ve only made a small variation, but you can see how beautiful this Genki-like design can be.

Here’s the patent drawing and my interpretation from the Beaufort Series of three-stick variants.

Now on to a particularly interesting bird kite design:  this is the Vogeldrachen (bird kite) by German Arno Haft.  It’s a design from the 1930’s and I like it because of the geometric shapes that make up its whole.  This could be a wonderful platform for geometric patchwork or applique piecework.  It’s also a straightforward design that could be a kitemaker’s first cotton project or adapted as a stylish paper-and-bamboo flyer.

Note the Pawel Elsztein above, I think it might make a nice lifter and it looks to be a very stable design, as well.  It might make a nice KAP (kite aerial photography) lifter or just a beautiful sky sculpture with its mix of open spaces and overlapping panels.

Next, are two plans by notable Frenchman Jonathan Frantzen.  Made in traditional materials of his day, these are sophisticated kites that can fully immerse the builder in the kites, techniques, and materials of the early 20th century.  Made in contemporary materials I have no doubt that these would be spectacular.

The Frantzen lifter and airplane kites.

The next two designs are cellular kites, but are inspired by early airplanes.  One, by Curt Mobius is from his Drachen-Bau und –Sport (1955), while the other is from Experimental-Modellflug, from 1968.  Both are rather elementary winged-box variants, but present interesting graphic possibilities.  I really like the Curt Mobius airplane that eliminates surface on the front panels of the box to make the aircraft body.  On the “drachenmodell” I could envision more taper on the wings, changing their shape radically, or modifying the aft wings’ size or shape.

These two “airplane” designs can take the maker in very different directions.

The last two plans I’ve included here are from very different patent drawings: the first, from about the time I came to kiting in the late 1970’s, and the second from the years between WWI and WWII.  It’s hard to see yourself as an “old-timer,” but I wonder what percentage of Kitelife readers remembers Don Dunford’s Flying Machine?  This was one of the first radical two-line stunt kites and was a big departure from simple diamond kites modified with two lines.  I’ve always loved the three-dimensional shape of this otherwise flat-surface kite.  I’m afraid that the model that I own is buried deep within my kite collection so I can’t vouch for the flying characteristics.  But everything about this design suggests stability and it might make a nice single-line flyer.  The last kite is by Conrad Dahl.  His Self-Balancing kite looks to be a nice platform for experimentation, especially the three-wing version.

How many of you remember the Dunford Flying Machine? 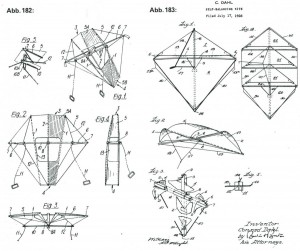 (plans above: Dunford at left, Dahl at right)

I hope that at least one of these kite designs might inspire you to make something unexpected and challenging.  Each can be attacked in a variety of ways and your finished product will be unlike anyone else’s.  As an example of how powerful simple variations of a single design can be, I’ll circle back to some of the three-stick kites in my Beaufort Series.  Inspired by Beaufort’s scale of wind force, I made twelve three-stick kites to signify each of the Beaufort numbers.  Starting with a simple hexagon, I then varied the three spars to finish with some surprising (at least to me!) variants.