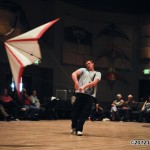 This is a topic near to my heart, as I’ve had the opportunity to explore kite competition from many angles in various roles over the past several years…

Even before I became AKA President last October, as a veteran flier, I’ve related this same basic reply:

The AKA itself does not create or spearhead new competition categories because that responsibility falls to the fliers who desire it and have the vision for why such a change may need to occur. The AKA’s job with any proven competition discipline is to standardize and document it, archiving and distributing rules or guidelines for general use, assisting with implementation at other events.

It’s always been this way, and appropriately so…

The fliers define what they want to do in this recreational sport, otherwise it’s not fun.

A key example would be multiline pairs… It was not an AKA-recognized competition category (ballet or precision) prior to 2008, and in order to have it added my friend David Hathaway and I were tasked with encouraging events to run those categories (even without a point value), encouraging participation, and making sure the organizers still sent in their scores and reports for consideration.

After working through all of 2007 and holding up our end of the bargain, the AKA added both multiline pairs ballet and precision for the 2008 AKA Grand Nationals in Gettysburg, PA… That category is still ranked and included in the standard AKA competition rules today, thank you very much.

It goes back to the basic values… Having a category added to existing rules and recognized as a ranked discipline does NOT assure that events will actually run it so the key really is to DO IT, regardless of point values, gather your friends, cohorts and kiters-at-arms who have the same interest and simply MAKE it happen, using demonstrated interest as leverage to “move it on up the line” into official recognition.

My favorite example I think, actually predates me and harkens back to the dawn of organized sport kiting when Don Tabor and his Top of The Line team was traveling the country during the late 80s… There was no nationally recognized sport kite competition, they literally went out and cultivated interest by holding clinics (teaching), encouraging organizers to run competition events, and finally, motivating those with the same vision to come together and make it happen… As I understand it, this technically came to fruition with the 1986 East Coast Coast Stunt Kite Championships held by Roger Chewning in Wildwood, NJ – this was the impetus that really kicked it all off, developed and promoted organically by the fliers themselves.

Almost every change to the rules over the past 27 years has been brought about the same way, proven on the field, discussed thoroughly by the ground level fliers, tested and proven, then brought upward to the sport kite committee or other organizing bodies for inclusion.

How do we really make create new kite competition categories?

That’s it – it takes a little bit of work, but really not much more than is required as part of the reporting process for any currently recognized event.

NOTE: I realize the following does not necessarily hit home nationwide, as fliers in many areas of the USA are having great difficulty finding indoor venues in which they can fly for fun, let alone somewhere they can actually run an event for 2 or more hours out of the day… That being said, the Northwest indoor scene is thriving with roughly 5-6 events per year, many of which often feature a competition double-header (two rounds, two final rankings) which technically gives them closer to 9-10 competition outings, with an average of 10 or more (sometimes 20+) competitors at each event – indoor is moving and growing in the NW.

FYI: The biggest headway I’ve seen folks make for good indoor flying space is by developing relationships with small town schools for their basketball gym and working out an exchange of services (maybe do a presentation, give lessons, etc), through low cost access in community centers (the place with the pool, billiards, gym, run by the city) and also through fliers who have a connection with their local church community – I’ll see if I can come up with a future article that goes over some of the things you might consider when trying to find an indoor space.

Putting it into action…

A recent example of fliers evolving their own sport is the single line indoor competition which was recently held during the 2013 Windless Kite Festival in Long Beach, WA last weekend… Passionate conversations with Nelson Borelli and Dick Curran (both dedicated indoor single line fliers) over the past couple years, as well as several “testing the water” discussions I had with other fliers, all motivated me to open a dialogue with Scott Davis (current President of the Northwest Sport Kite League) to encourage this new category at events through this coming year.

We had FOURTEEN competitors for the single line event this past weekend, one more than we had in the regularly sanctioned “Indoor Unlimited”… This exhibition competition was a rousing success, prompted a TON of positive feedback from fliers and spectators, and enticed at least two fliers who openly shared the fact that they wouldn’t normally have competed if it weren’t single line only.

It was run as a free event, and yet we still had a full class in the Indoor Unlimited!

Something that I noticed quite clearly, was that the indoor single line kites and fliers also shined more when they were displayed in their own event, even the judges (predominantly sport kite fliers this time) commented on this dynamic, and I even heard mention of something I think I correctly interpreted as something like “it was interesting to see the single lines on their own, and seeing them in their own light showed a very wide range of skills, techniques and styles“, showing a clear cross-appreciation between all the indoor fliers.

The flight characteristics of indoor sport kites are incomparable to those indoor single line kites, a totally different skill set and creative thinking is needed in order to compose a well-structured single line performance, the only shared quotient is choreography and entertainment value, yet both are very challenging and artistic… Similarly, the judging approach also needs to be a little different for single line due to the different and often more subtle control aspects.

Next to Revs, indoor gliders are probably one of the fastest growing bodies of “hard core” recreational fliers around – the glider designs available today are varied and complex, as are the performances and flying styles of those who enjoy them… They are an artistic and passionate bunch representing an ENORMOUS range of demographics from whippersnapper to senior citizen, and we’re seeing more joining the fun every day.

Indoor gliders are simple to use, and can be much less intimidating to a 60 year old flier than say, the potentially more aggressive stylings and hand speed required to perform a winning dual or quad line routine indoors… At a time when we’re facing challenges connecting with the public as a healthy pastime, indoor single line flying is drawing lots of new faces, and they’re sticking around!

In this case, I believe that more is, well, more.

These days, indoor single line fliers are “stepping out” at nearly every indoor event I’ve been to over the past year, and better than half the “sport kite fliers” actually use both indoor sport and single line kites recreationally, but the existing competition format cannot help but favor sport kites due to their naturally more “active” nature, speed and “obvious” maneuverability so the subtleties of single line very rarely have the opportunity to be properly scored for their own set of demonstrated skills and maneuvers, no matter how brilliant or enjoyable the routine may have been.

With this in mind, the AKA Sport Kite Committee has voted in favor of adding Single Line Indoor Ballet as a new, added category for next season, and to create a standalone Indoor Committee to represent all types of indoor kiting, rather than have it be managed by the Sport Kite Committee as it has been in the past  – this proposal is now slated to go up for vote and possible approval by the AKA Board of Directors on their April 17th meeting – if it’s important to you that this passes, I strongly encourage you to send letters of support to your AKA Regional Director as they represent the majority (13 of 22) of possible votes.

So we’ve talked about the creation of new competition categories or disciplines, but the same principle also applies to promoting and creating new skill classes within any given category… Just because the AKA doesn’t officially recognize a skill class yet, doesn’t mean you (the organizers and fliers) can’t run them anyway to develop interest and build up your flier base.

A key example would be Indoor Unlimited… Currently, the AKA only awards points in an Open Class with no distinction between skill levels pilots – but even so, the Northwest Sport Kite League asks people which class they want to be in (experienced or masters) so that while they report scores to the AKA as an open class, they also provide top three awards to BOTH experienced and masters pilots at the end of each event.

Using this approach, the event can encourage participation and reward them all the while accumulating a track record that will eventually provide leverage toward officially recognizing the two skill levels once there is enough participation to warrant adding it as a national standard.

End of the day, things only become real when we take action – creativity, community and sport comes from the fliers, not from a sanctioning body… I heartily encourage you to get out there and do what you love to do organically, there’s nothing to stop any flier from trying new things at an organizational level, as long as it’s fun and safe for everyone involved.

Many apologies if this kite competition article is incomplete and jumps around in any way – I’ve been patching it together for the past couple of months, but wanted to get it out while the subject matter is current.