Organized by “Ministerio de Cultura de la Municipalidad de Rosario – Santa Fe Province and Mundo Hobby” which are represented by persons that are very “identified” with a project.

A dream which lead during 13 years, I mean Susana Fandino Ariel Ariel Illanes and Carnevali.

I would start to tell you some words about 13 number.

If you reread the title, note that this was the 13Th Festival, which started on Friday 13, year 2013.

Coincidence , superstitions , premonitions , may have relationship … Historically, mankind have given the number 13 an special significance and this is found in the biblical accounts, Middle Ages and Viking Age stories also and even Solar and Gregorian calendars , etc. etc .

Usually it is associated with “bad luck” or rather that luck is not as we want, every people and culture have different connotations. Obviously we could talk a lot about the number 13; in fact superstitions are still alive in our minds and are transmitted over generations.

Folks, I can say that despite the 13 number, we Painted the Rosario’s Sky giving it more color than a gray sky.

The participants and audience did not feel intimidated by the weather, and enthusiastically participated in the activities.

This year visited us:

They have several reasons to make the trip; the females feed offspring birth, and in the case of males, looking for food and mate with females. So, travel synchronous with the onset of winter in the south to the Colombian coast.

Alejandro said … “Knowing whale’s behavior; I decided make a giant whale with Argentinean’s flag colors in honor of your Country and Let’s Paint Rosario Sky Kite Festival. Although on Sunday, the atmospheric conditions, overcome the solar whale balloon like the windsock, having a memorable appearance”. 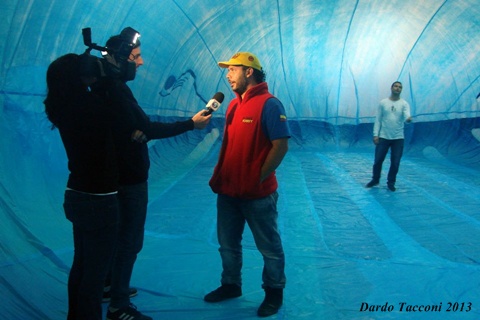 Is an Organization of one year old. Nowadays it have 40 members and the current President is Mr. Edgar Daniel Gonzalez Mercado. Edgar came with Victor Vera , Ramón Portillo , Miguel Chaparro and Leonardo Dominguez in order to enjoy our Festival. 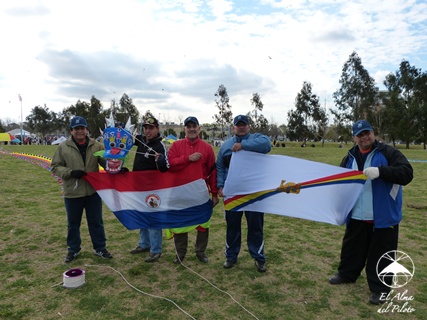 They try to recovering Pandorgas flight at their Country. Edgar recalls that as a child, he flying the “Kururu” – that mean toad – it is a kind of Pandorga of square format with two rods crossed. Over time they were making round Pandorgas which contained 4, 5 and up to 8 rods by size. Likewise they make Rokakus, Aircraft, Stars, Deltas and Dragons. The cane rods are of tacuara and peteriby wood.

This year started flying acrobatic kites near on the Paraná River beach. Is this your first visit and participation at an International Festival, and they mainly flew the dragon and zebra.

It did workshops for local schools students; and at the Culture’s Department of Rosario’s Municipality; our dear Betty performed these masterpieces with cane rods and paper. She expresses her memories of childhood, their present, and how imagines the future; combining shapes and colors, applied Quilling techniques also. 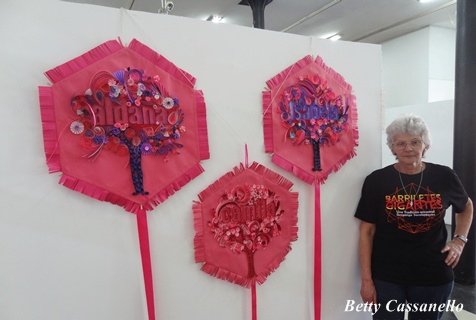 When the muses appear, time stops for her, her imagination starts flying, hers works reveal their thinking and the public was amazed looking the exhibition.

… “My heart flies with them … you have to make a kite, and I sure that you realize what I feel, you will change the day” … she says.

Workshops were held to make solar balloons by Bimana.

My friend Dardo Tacconi, lived an unforgettable experience being swallowed by the whale… Do you remember the biblical story of Jonah?  Well; in this case to get out, he first had to prove indoor flying skills…

At the evening we went to the National Flag Monument to fly during a while, but the weather it was no good and went to the restaurant called “El Lago”, located at Independence Park to enjoy a fellowship dinner.

The weather was a little better than the day before and we started assembling tents, marking off kite’s arena and so forth; so the schedule depended on the weather.

At the evening dinner and awards was held at the same place, Scalabrini Ortiz Park. On this occasion highlighted was “friendship”, which endures during 13 years.

Polar wave continued on the eve of spring, and we could fight with those who actively participate making the audience feel protagonist.

We continue the games and demonstrations. At the end, as Alejandro said it appeared the 35 meter Humpback Whale as a giant windsock.

Year after year there are new things to be shared with the community; we hope to be continuing next year in the same way.

Eventually I must confess that I’m not superstitious, but thankfully that this is not my article number 13…