Here are some comments on refined beauty and design.  Take a look at the two embedded videos; one is a charming walk with Alessia Marrocu (Italy) and her kites, while the other is a visit with Ramlal Tien’s (France) Sentinels.

Both videos show the beauty of these elegant kites, the impact of flying numbers of similar kites in close proximity, and the power of elegant design and color.  I’ve always thought that Ramlal’s Sentinels look as if the sky has been ripped open – I expect to see fingers of other-worldly beings reaching through the voids to completely tear the sky apart.  OK, that’s just me, but the impact of these simple white slivers is undeniable.  I’ve seen others make them with surface decoration and they are a pale comparison to the original. 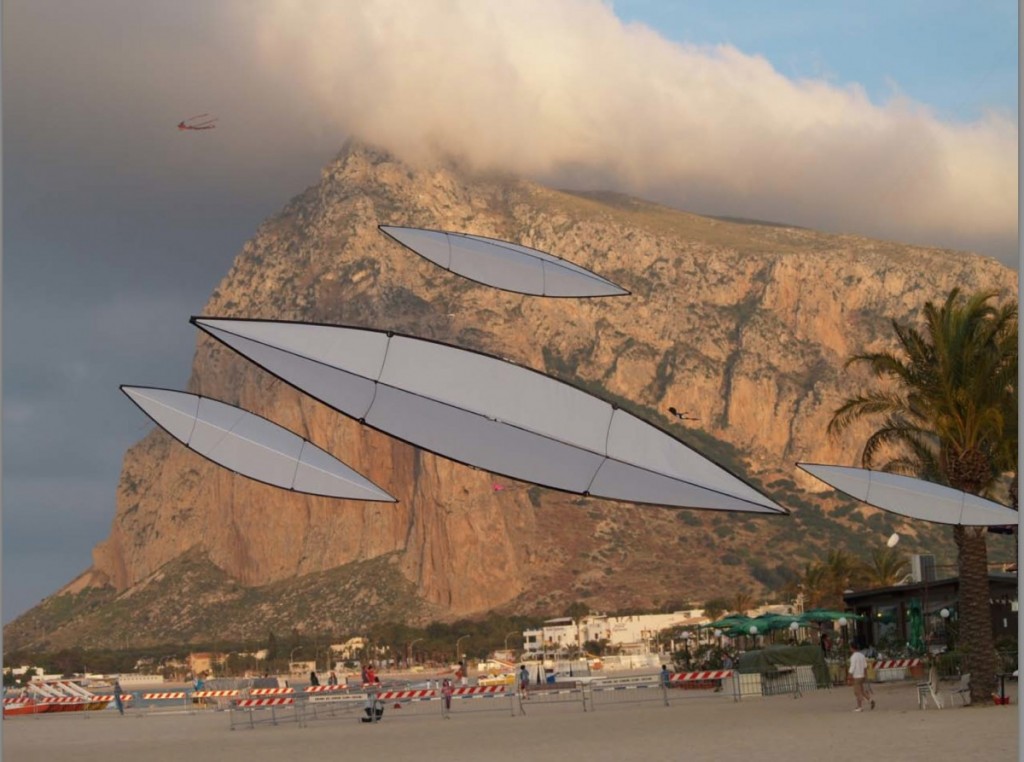 And then there are the wings of Alessia; a single piece of bamboo with painted washi, expertly crafted into a flying wing like no other.  Expertly bridled, each flies with remarkable stability for a high-aspect-ratio design.

In some cases, when we look at remarkable kites from around the world, we look at the amount of highly skilled work involved: Tsutsumi-san’s (Japan) beautiful tombi dako, Sato-san’s semi-dako, Mr. Ha’s (China) wonderful butterflies,or even Bobby Stanfield’s (Southern California) remarkable box kites.  But Alessia has gone the opposite direction, to a kite so simple and elegant that we all wish we had thought of the idea.  As a kite maker, I look at this wonderful kite and know that it wouldn’t be difficult to make, yet it is such an original idea, that I see it as hers and hers alone.  (Another great example of this “simple-elegance” idea is Ceewan’s (Malaysia) Geo-pointer, popularized in the US by Jon Trennepohl (USA).

There is an incredible amount of refined design happening before our eyes in the realm of large, inflatable kites.  It’s easy to visualize the fly-ability of first generation giants – octopi, mantas, and men – but in the last ten years innovative derivatives have proliferated.  We see winged-dragons, owls, teddy bears, dogs and cats, flying saucers and almost anything else you can imagine.  I hope I’m not being naïve when I think that much of this development has happened because of the openness of sharing ideas and techniques.  Internal line-bracing and airfoil-shaping systems are just one idea that seems to have pushed these developments forward.

In the other major soft-kite arena – traction – developments of the technology have been even more apparent.  With economics driving their development, inflated-leading-edge kites used for kite surfing quickly became the dominant player in the sport.  The sport influenced the kites’ design in that a premium was placed on brute force (to pull acrobatic riders higher and farther) rather than true kite performance (upwind performance that would have a profound impact on racing).  Also of great importance was the ability to safely de-power these giant kites so that wind gusts or crashes could be safely handled.  When I look back to the early 1990s and think about us buggying with two-line kites (no de-power ability) or first-generation four-line kites (too much de-power ability) it’s a wonder more of us didn’t hurt ourselves – badly.

In traveling to Draper and Steep Mountain (Utah) to visit one of the finest para-gliding spots in the world, I realized much of the same technological change has driven the para-gliding industry.  Canopies are stronger, lighter, and more resistant to collapse and stall because of new materials and better understanding of soft-wing technology.  There is a refined elegance in this great sport and I think it has been driven by the same sail technologies at play in kites.  By the way, readers should visit www.savesteepmountain.org and sign their online petition to ensure that Steep Mountain (Point of the Mountain) remains intact.

A little on the kitemakers mentioned above:

The Ha family of China has, for generations, been the primary maker of beautiful butterfly kites.  They have worked tirelessly to preserve the kite heritage of Beijing.

Alessia Marrocu from Sardinia, has been involved with kites for her entire life.  Artist, performer, and genuinely beautiful person, she is a bright star in our kite galaxy.

Masaaki Sato (Sato-san), from Japan, has helped reveal many of the lost secrets of Nagoya’s insect kites in his attention to detail and suburb craftsmanship.

Bobby Stanfield of California, USA, helped set the standard in American kitemaking with his exceptional cellular kites of the 1980’s and 1990’s.

Ramlal Tien is one member of France’s Colectif Zoone, makers of elegant and stylish kites that have graced festival skies for over twenty years.

Jon Trennepohl and his wife Maryanne (Michigan, USA) have successfully run a kite business for over twenty years.  After actively participating in every facet of sport kiting, Jon has brought his kitemaking skills to innovative single-line kites.

Tsutsumi-san was the caretaker for Masaaki Modegi’s Tokyo Kite Museum in the early nineties.  His tombi dako, paper and bamboo bird kites were examples of kite making perfection.

Leong Chee Wan (Ceewan) is from Malaysia and has consistently shown a flair for innovative kite and surface design, combining his traditional kitemaking past with the modern materials of today.

Nobuhiku Yoshizumi of Japan excelled in the making of miniature kites with an understanding of materials and scale that always allowed him to successfully fly his creations, even in stiff beach winds.