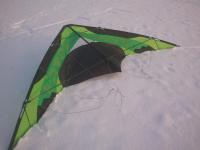 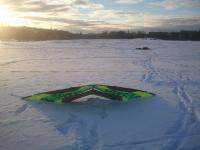 Today was the big day, the first time with the Fazer XXL. I therefore went to the big field with room for the lines - the closest field is not just big enough. This larger field is not next to a beach so that the wind is typically a bit less than the forecast suggests here. That was something I saw as a bonus when approaching the field not really knowing what to expect regarding the pull of the kite. This kite will most likely be the one kite whose leading edges I take apart before transport. The length of the Fazer XXL's sleeve with the LE assembled is about 2.25m and my ski bag (mostly used for kites however) is 2.15m. When seeing the kite assembled you realize that you never will find it beautiful. However I have gradually learnt to accept the appearance of it and mind it less and less. It turned out that it was a lighter wind than to my liking - I should have been on one of the "kite hills" of the field to get a bit higher wind close to the ground, but I didn't want to compete too much about the space with the skiing powerkiters there.

I had expected that the XXL also would have the corresponding oversteer as the XL. but quite quickly noticed that this wasn't the case. Yet I have shortened the upper outhaul of the XL by centimeters! The 90 deg turns of the were just a bit less instant than other kites (which is not surprising considering the size of the kite and perhaps the low wind), but there is no corresponding oversteer! I should compare the two bridles (and why not the sails at the same time?) closely one day. Perhaps one wind less day put a horisontal tight rope in the garden and let the XL and XXL hang down from the tow-points? 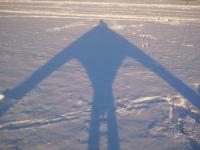 The LE to LS fittings couldn't take negative forces - I often needed to do the walk of contemplation because a LS had popped out. It didn't take any hard ground contact for them to disconnect. On one occasion a cart wheel caused it to pop. This was the one most important thing to address when getting home.

From the start and perhaps during the first hour I was very careful - after all this is a large kite. During the first half of the session the required force was somewhat a disappointment, but not the cardiovascular exercise that was provided by the conditions - running in the snow to keep the kite airborne and the large arm movements required made the heart pound. Later when the wind picked up somewhat, the position of the arms were more in front of me compared to when using other kites. It was kind of strange feeling having a kite that pulls noticeably and at the same time could feel a little under powered in the current wind.

I had imagined that axels would be difficult to achieve and pitch based tricks to be more accessible. Well axels were no problem. Entering a turtle was something I didn't manage to do the few times I tried - the winds were a bit to light and sometimes more or less not there. There light wind conditions gave a bit crowded feel, but to my surprise axeling was a way to turn the kite during this limited maneuverability circumstances. Tricks were most often single isolated with few trick combos. I hope this will improve in a bit more wind.

With a kite this size the trick execution took longer time. I could focus on following the kite during the axle and taking up slack during the revolution. Can this be the way to figure out the second pull of the half axle?

Fade launches worked out well unless the wind was too low and the (very) local snow depth too deep (OUUUUUPS!!! - I fell backwards, but the snow made the fall soft!). Belly launches, that suited the light wind well, worked out well. Side slides and landing the kite backwards from a high altitude were also quite accessible - the large kite kind of evened out the "noise in input" (like a large low pass filter). 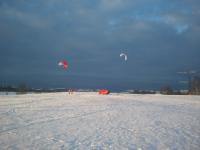 When going home I talked to the remaining powerkiter. It seemed to be a nice person and I hope it wasn't the one who had previously shouted aggressively and rudely to the dog (and dog owner I presume) when the dog approached his kite. The rudeness in the shouting is really a bad move. In some board, some group, some meeting some where, some time that have the power of deciding what is a permitted activity, it is very much more likely to have dog owners than kiters represented! Well back to the topic - what we talked of was naturally kites: places (unfortunately no new near fields were reveled) and compared our activities. He was so into the powerkiting, so I saw no point in promoting duals. However when I mentioned that I knew of a very maneuverable smaller quad foil that wasn't so expensive (the Smithi Pro), he appeared interested and seemed careful to memorize this.

For how I dealt with the low temperature this day see the posts http://kitelife.com/forum/topic/7601-prism-nexus-maiden-flight/?do=findComment&comment=62116 and http://kitelife.com/forum/topic/7601-prism-nexus-maiden-flight/?do=findComment&comment=62178 . 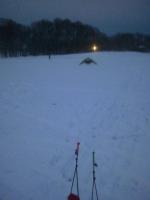 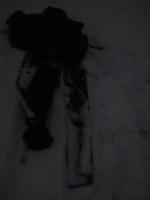 Follow up - minor mods and physical exercise aspects:
The most urgent mod to the kite was to do something to the LS that kept popping out from the LE fitting at the slightest ground contact. A very simple solution - wind tape a couple of turns around the outer side of the LS to increase the diameter. I used some white "general purpose" tape (much like electrical insulation tape). The tape was only added to outmost part the LS so that it couldn't be seen when inserted in the LE fitting. If it would pop out (even if I don't think it will) I would see it more easily now as a white dot against the sail (from 35m away).

The second and third mod was to add small string loops to secure the sail tensioners and also the battens. I used a budget 1.5 mm synthetic line. It turned out that it was not possible to make knots that lasted (strange since the line was sold as bricklayer's cord - they must also be able to make knots) First I tried to melt the knots so that they wouldn't open. This failed because it weakened the molten/non-molten interface too much. What seemed to work was to seal the knot with hot glue (but not too much heat could be applied or the line would go weak again). If I only had ordered more of the (quite thin) sleeved 90kg dyneema line to use instead!

I got something that a rarely get when doing kiting: sore muscles and this time it was close to everywhere (e.g. it completely beats me how you can get sore abdominal muscles from kite flying!)! I don't know if this would have been better if there would have been more wind so that there would be less requirement of running around in snow (which slows you down). The only time that I got something that resembles this is from a few windy sessions with the Fazer XL, but the soreness was then less. In a way this is great news. From an hour of tennis I don't get sore muscles (possibly a very slight and modest receipt-of-activity the day after, but I don't think of it as soreness or discomfort), so to make a more complete healthy exercise/training I should add a weekly Fazer XXL session. No, not realistic, to time consuming to get to the large field, but at least some times when I happen to be there I try to add some XXL time for the sake of training - I mean this is way more fun than just jogging/running or doing push-ups etc (which therefore never gets done)... 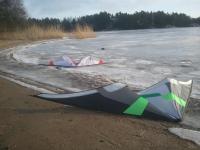 There has been a long time since I flew something "normal" during "normal" conditions. The last time for this was with the Infinity and the Kymera in the beginning of December. The reasons for these few and "abnormal" sessions that I can recall are: a low wind session in rain, traveling, a very hard wind session and the new Fazer XXL. As the title says, I didn't get the FAs going today and I also didn't feel much in touch with the finer control. OK, even though the flying was not great I guess this was a necessary session - After a (kind of) break there is always a first session of (hopefully) coming back in form.

Can using a large kite affect how you handle normal sized ones? How much of the muscle memory carries over from one activity to another after days weeks and perhaps also more or less permanent habits? Two observations from recent tennis playing. My wife and daughter watched for some minutes when I was playing - a quite rare event since we play at different times and groups. They said something like (but not literally) that when I run it is with long steps that looks like something of an elk on the loose (you must be close to someone to hear the truth). So now to the parallel in kiting, how do you run backwards and forwards there? - You increase the length of the step and run smoothly to be able to maintain constant tension or slack.

Another tennis example: another player remarked that it seemed to be a god day for me because many aspects worked out, but that I constantly forgot to stop completely when running to the net and doing volleys (you should stand as stable as possible when aiming and be equally prepared for a ball coming on either side of you). Unfortunately, the player that kindly had praised my play that day, didn't make any reservations when I mentioned my family's elk analogy. So the kiting parallel to running to the net could be moving forwards when doing a 540 or a FA in the centre of the wind window on a somewhat windy day. After the flare of the 540 and to maintain a fade I've trained hard to maintain the forward motion (and not to stop as when doing volleys in tennis)
Does this sound exaggerated? - Well I certainly spend more time kiting than playing tennis, so if there is any cross-talk in the pattern of one's movement between these activities I'd expect kiting to dominate. 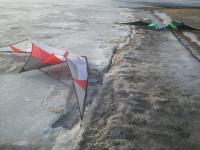 Normally the preferred wind direction is normal to the beach. But today the wind was close to parallel. I therefore got a chance to try the kite (the kite - not me) on ice. Tested some side slides while in contact with the ice (such as those shown a while ago in the "Follow us on Facebook" frame in the top right corner of the KL forum main page). The sliding on Ice was quite straight forward with the only pit fall being if the kite fell from or towards you. Due to the low friction the nocks won't only slide side-wards but can also happen to slide forwards or backwards so that the kite falls. This made normal starts difficult as well. If the kite was on it's back I needed to tow the kite on the ice until I could find a stone or a stick that someone had thrown out (and now was stuck in the ice) and use that to hold one nock so that the kite could be pulled up into start position. The sleeping beauty starts were instead helped by the smooth ice layer - there was nothing that could accidentally grab the nose when doing the "ground back spin". When thinking of it - could I have done some risk free dead launch practice on the ice (or would the hard floor like surface of the ice make dead launches impossible)?