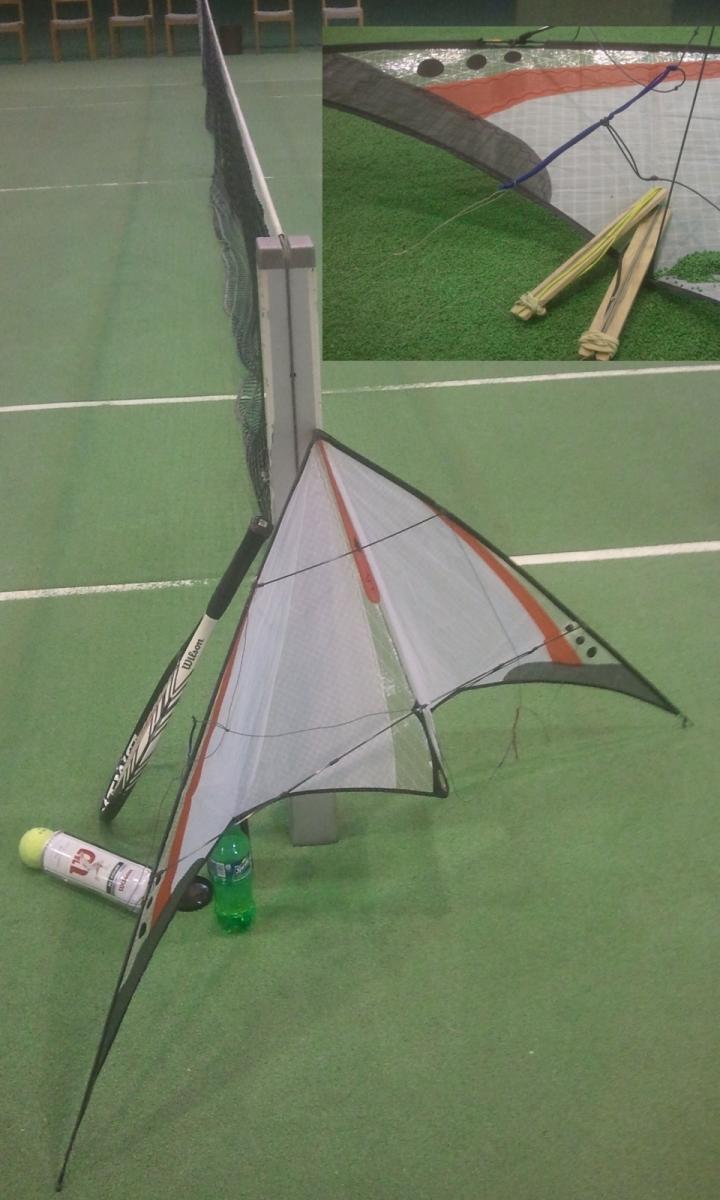 This reminds me of a Swedish proverb: "Som en åsna mellan två hötappar" - like a donkey between two hay feeding stations. This means here that there is a problem of choosing a preferred activity. The surface of this tennis court was a bit odd. The first time I played tennis during the trip I didn't realize that that the smooth surface was made up of green rubber gravel. Those handles were not as quick to adjust as I had hoped for unfortunately. Perhaps one should add a little knob on the handles to wind the line around to make the process evening the length simpler?

The opportunity
Line tension, line tension and line tension or should I rather say that technique, technique and reliability training was the theme of the week. On vacation in the alps the key occupation has been skiing of course, but the circumstances provided opportunities to do tennis and kiting as well. The reason for the opportunity for the tennis and kiting? Waiting for a teenager daughter not really appreciating any morning I had a chance to use the always free tennis courts of the hotel.

Active learning
Before starting with the kiting session I'd like to point out one similarity between all three sport activities and that is the constant aim of improvement in technique and reliability. Furthermore I'd say that kiting (which is the activity I spend most time doing) has introduced/evolved an ability (I hope) to find the most important thing learnt from a session and then to take a short note of that. If you have this goal of not wasting lessons learned, it comes natural to think through the previous session(s) and have an idea of what to think of and what to practice the next time. I believe one reason for starting out with the notes and written preparations is that on the field there are no other persons to learn from. Well, when learning from videos, as others have already pointed out, it can be difficult to remember it once you are out on the field. Then resorting to watching videos is not what you would like to spend time on there - field time is precious.

My belief is that you teach yourself mainly (with the possible exception of introductions etc.), and only occasionally you get some nugget of spot-on info from others. Another reason is limited session time. If you never made any notes, never read them through/thought them through and never did any (tennis) swing rehearsal the evening before the weekly 1h session, much of the session might have passed before you get to practice the current issues and think the thoughts you had the last time.

Preparation and indoor location
Well for this session I didn't have much prepared since I've never flown indoors before, but have only done some low wind sessions with a minimal line length of 6m (20ft). Almost always when I play tennis (indoors) it is before work and I'm in a rush leaving no time to ask for permission to use a free tennis court for kiting. I only had two things to practice that I had decided before - the 360deg (the kite goes around you) and the up and overs (you guessed it, the kite goes up and over you).

I didn't really know what line length to use other than that that they should be shorter than 6m (20ft) "since it was indoors". I was also encouraged here to go short by the "Kaiju" line length of 2.13m (7ft), but at the same time being a bit conservative by making it slightly longer. When measuring the lines after the session I had ended up on 3m (well 2.98m + handle length).

The handles were quickly made (while packing for the trip) by cutting a paint stirrer stick and making a few strokes with the file. The evening before the session I started out with the 6m lines and tried to make the length extending from the winder equal by winding in the same way - didn't work, needed to wind taking some short turns (normal to the original wind direction) as well, to make the line length somewhat even. Since it took some time to get the an equal line length, I never came to change the line length during the session. Finished up with the rubber bands to hold the line to the handle. I had planned to make a slidable cover using a wide heat shrink tube. The idea was booth to keep the lines in place and make a small well defined exit for the lines from the handle. Turned out that the widest dimension of heat shrink tube I had was just a fraction too small. If you would try to use heat shrink tubing anywhere near Dyneema/spectra/polyethene/polyethylene lines (which also can include bridle lines!) you should be aware that they start to melt at about 130deg and one common temperature for shrinking of heat shrink tubes is about 125degC. From experience I know that it is a bad idea to add wear resistance to the bridle line on a Rev around the (original) bridle line where it goes over the LE nock by shrinking a heat shrink tube around it - the core of the bridle line melted. It worked however for another bridle line of other material (the core fibres were black and never melted - carbon?).

Asking if it was OK to use the tennis courts at the hotel for kiting always ended in the same way. I had to explain that indoor kiting was possible and showing the packed/folded kite. No one however, could say if it was a good or bad idea, just "go and ask that other person (hotel employee)" - so I didn't in the end.

The session
Using the initial setting with the nose neutral or slightly backwards, the kite didn't even take off. Changed to almost maximum nose toward pilot setting which made the take off possible.

Nose towards pilot - required for take off.

To this point when doing (and/or attempting) 360deg outdoors on 6m or 15m lines I've found that when doing the backwards running around in circles, running in a direction that makes the kite to fly into tensioned lines, i.e. in the leading side of the temporary wind window, works. This time I instead tried the suggested method here (KL) of extending the arms while rotating and then combine it with only a little jogging/walking in circles. Yes, this was calmer, but I don't know if this was from the line length or if it was from the arms extended way of doing it. The most common way to fail? - failing to maintain line tension. More practice required.

The first parts of the up and overs went fine, but ending it was another matter. Following the advice to pull downwards when the kite was above was almost intuitive and most often went well. The problem was to turn to the side when finishing the up and over. The turn lagged so much so that the kite hit the floor most of the times. I pulled more aggressively in the ending turn but really never got any control here. I'm sure that this aggressive pull is the wrong way of doing it, should try it more times with a moderate pull. What would happen if one instead would have attempted to land on the wing tips? Perhaps it is the heavy nose forward setting that is contributing to the slow turn?

The floor surface consisted of a quite densely packed rubber gravel in a thin layer, a type that I've never seen before, yet somewhat surprisingly, slightly more slippery than "my" normal indoor tennis court. The short lines could just be used to roll the kite up (lying on its back) from the ground to relaunch position, without slipping on the tips of the standoffs. This was possible if the kite was given (pitch) rotational speed when getting to the launch position. To get it into launch position more easily, perhaps some high friction layer could be added on the wing tips and where the stand offs goes through the sail?
The rubber bands on the adjustable lengths handles had an unexpected use. They had a good enough grip onto the floor so that they the kite could be placed on its wingtips ready in launch position. Very good since none of the methods of starts where the kite was tossed worked out for me. Had more luck when starting the kite from ground in a flared position. I then got it in a 2-point start position in a kind of quick rotation direct from the initial pull on one line.

Nope the kite is not leaning against the net here. Instead it is hanging on the handles whose rubber bands had enough friction to balance the kite.

How much physical exercise was an indoor kiting session compared to tennis? Well that depends on what you attempt to do and how, but both activities makes you thirsty.

Thoughts and preparations for the next time
Maintaining line tension is the thing, also try to see when the tension can be reduced, perhaps that can help making that ending turn of the up and overs better?
Continue to work on pancake landings pop-up launches. In particular the pancake to (2-point) launch position.
Study videos of throw launches. Is some weight somewhere along the spine required here?
Try other line lengths than 3m.

The area and the trip and more skiing
Being a ski resort in the Alps, Schladming offers beautiful views of the mountains obviously. By the end of the week we still hadn't tried all the available ski slopes. The scale of it was impressive. E.g. they had arranged with dams looking like mini lakes in the mountains to supply the water to the everywhere present snow guns.

This has been the place for Word Ski championship in (as can be seen in the huge yellow sign) 2013.

Schladming town from above

Ski "high way" to the next slope.

A ski lift and a view over Schladming.

Those mean looking ski stands were moving on floor rails as well.

I appreciate the culinary differences. The portions were typically large and hunger a distant idea. Odd stuff: pancake soup, omnipresent gulash soup, a fondness of horse radish (spicy), germknödel (fat warm steamed bun with plum jam, a bit sweet mix between a lunch and a desert) and (less appreciated) alcohol being served in restaurants in the ski slopes. I mean I don't mind any category of alcohol containing drinks in general, but mixing downhill skiing and jagertee/beer is not really a good idea.

One day we took the train to Salzburg ( https://en.wikipedia.org/wiki/Salzburg ) for a four hour visit in the old town mainly (really short yes). I remarked to my family, that this time we were like a flock of hurried tourists at home in the old town of Stockholm. Mozart balls (chocolate, pistachio marzipan and nougat) were being sold "everywhere".

A fountain in the Mirabell garden.

The Swedish nature might be less extreme than the Alps (at least in terms of the mountain areas) but it still offers beauty. The below images is from a cross country ski trip on the local golf course one week after coming home. Daytime during summer those those fields are a no-go area due to the many golfers. But I have also ruled them out as kiting fields because they are not very large, probably giving too turbulent winds. Perhaps these fields would be good for low wind (less turbulent?) session during off golf season? 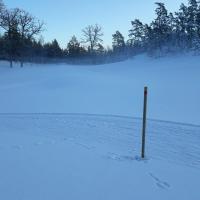 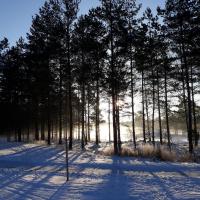 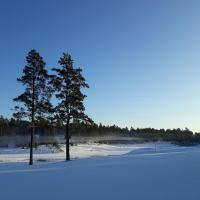 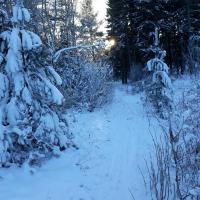 Though a bit destructive, as a kiter I can't help thinking of how it would be to fly a low/zero wind kite through those mist layers.