The indoor events and preparation

During December I’ve attended two indoors model aircraft events at an indoor football field (“soccer” to you over there). No, there were no other kiting activities there, so there were quite many basic questions regarding sport kites. Since I’m rather new to indoor kiting (give one or two DLK 4D indoor attempts) these two events have been valuable for me in the sense that they serve as deadlines – Going there without anything to demonstrate was just out of the question. To be clear – meeting the deadlines (within about two months) would not have been possible without prior outdoors low/no wind practice. 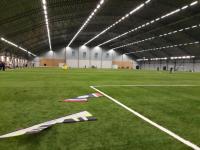 The Rev Indoor and the Rev B-series Std. The yellow package in the background contains the obstacles for the drone racing course. Those drones (as opposed to many others) are ridiculously fast and manoeuvrable with a sound of “ripping the air apart” - Scary!

I dressed as for a tennis session (in shorts etc...) for the events and brought a bottle of water and snacks. Lesson learnt: Bring a large bottle so you don’t have to stop to go and buy yet one more lemonade… This large space allowed me to use the 4.6m (15foot) and the 8.2m (27foot) line sets dependent on how many RC planes, helicopters or multi rotor drones that happened to be around at the time. The artificial grass offered an advantage over ordinary indoor (non-carpet) floors – the lower part of the down spars didn’t slide away when the kite was standing on the ground with the LE up.

The workhorse of these quite long indoor sessions (longest one being 7h) was the Rev Indoor. The Rev B-series 1.5 Std worked quite OK, but (not surprisingly) with a slightly higher required step rate. If you really like physical exercise the Fulcrum could just be flown (only with the 8.2m lines tested), but not so much more indoors. Even fitted with the UL-spine it was not sustainable, not in this “extended mission” context at least – maximum time before rest was required for the fulcrum was about a minute for me. 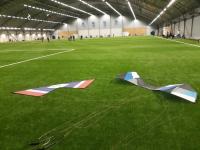 One of the kites required much footwork – guess which one. 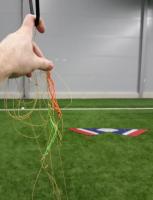 A close to invisible black line hung down horizontally from the ceiling causing disorder. Well, on the other side, after tightening it up, it offered some rest for a while while untangling it.

I also tried the 4D to see if the quad indoor kiting activities immediately spilled over to it – no such luck really, but to be fair I should give it some more time then the minutes I spent on it here.

I got inspired by videos like (Connor Doran and Scott Weider):

Also from the topic (about polyester ripstop and mylar streamer tails):

To be able to offer variation and give the indoor kiting some an extra show element I made streamers from a metallized mylar film rescue blanket. To make the streamers from (hot cut) polyester ripstop would have taken too long time for me to meet any deadline. The first streamer was 3.5cm (1.4inch) wide, but affected the kite too much – it became difficult to turn the kite from the side where the streamer was connected (when connected to a wing tip). The second (“working”) streamer I made was therefore narrower, 2cm (0.8inch) wide – This streamer had much less effect on the kite. Both streamers were 6.3m (21foot) long. The cut segments (just from sliding a sharp pair of scissors forward) from the rescue blanket were connected with patches of double sided tape. I was careful not to leave any part of the double sided tape patches exposed but was carefully covered with mylar. 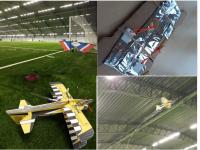 A mylar rescue blanket streamer of dual use. It worked well both connected to one side of the Rev Indoor and to an RC plane. Visibility was slightly higher when in motion when “dynamically” reflecting the light from the indoor lighting.

I noticed that the father and son “temporary indoor neighbours” (piloting a RC plane) in the indoor flying event were in a playful mood, when they tried to to tow a smaller plane. I then offered to lend out the streamer which they accepted. They got so fond of it so they continued to use it for the rest of the evening. Moving the streamer from the tail of the plane closer to the wings affected the control of the plane less they found.

I should not exaggerate the interest for kiting activities at the event, but till the next time I perhaps should be prepared with an indoor glider kite to lend out (I don’t own one – only heard that they should be easy to pilot) and have useful kiting links on a sign or a piece of paper for interested persons. Many of the questions asked tended to be really basic, leaving much to be explained.

I have stepped over the threshold, left the need of the isolated forest glade to do the practice in (was the isolated place really necessary?) and want more practice because it feels rewarding – I’m on my quad indoor honeymoon! Frankly after trying a new kiting discipline/variety, I'm proud as a child again. Kiting as an activity has so many aspects to enjoy!

After this two months of Rev Indoor practice (also outdoors) there are naturally and of course many things remaining my practice list (most things actually). Some examples:

Some experimentation in an early stage I look forward to pursue: