I have been home for a few hours now from our debut performance as Team KiteLife in South Padre Island, Texas. Hosted by B&S Kites.. Bill and Susie Doan..along with the City . What an event I must say too start! Loving , HUGE crowds..along with a bunch of well known kiters that love exactly that...priceless. A job well done and hopefully a continued and long lived, positive relationship between B&S Kites, the City and the South Padre Island Kite Festival. I am sure I can speak for the whole team in saying... We are HONORED to be a part of the revival and can only hope for many more years too come.

All the shared Team photos are from a wonderful woman Kathy Martinelli-Zaun. Hopefully she won't mind the share. Both she and her husband love watching pilots more than kites and boy...the pictures show.

There is a ton of media for sorting. So I have included only a few shared photos from Kathy and some of my own. I will also give some encouragement towards the team members for submissions..

Now on to the good stuff...

I have been crying since I got home and started actually reviewing pics. Letting expressions sink in and thinking of what has transpired over the last 6 days. It is just simply mind boggling. I am quite sure more thoughts will roll later...just helping a release.

4 pilots..of which some of which have never met..let alone flown with each other.. just went out as a Team and spanked it!

Fast paced..non recycled movement through a 5+ minute routine. Constructed on site 2 days early by none other than J.B. himself.

The First day consisted of writing about a third of the routine and setting up. 4 guys..never flown together..Extra Vent wind... 9 hours later we were still smiling regardless of the work and mind melting task at hand.

Day 2...more arm lengthening wind. We opted on writing as much as possible by using stick simulators throughout the entire day into the night.

But as with any wind hungry group...ended back on the beach late that night. Meshing as much as possible. Things are starting too flow now..the potential can be felt..momentum.

Day 3.. brings more flying...writing..stick play... and honestly ...a complete blur. Did I mention the 3:30 track I must perform with INDOOR this evening with no practice! I have barely flown the thing outdoor,much less Indoor in front of several hundered people.

I do remember we practiced at the Festival site...which was also next to the Convention Center hosting the Indoor Event....staring at me all day as everyone was Indoor playing before the show.

The practice was coming along...but we still had hang ups and only had about 3.5 minutes of the routine written...therefore never completing the song. But alas....time for indoors.

So many great performers. I will not even try mentioning names. Tickets for the event sold out. More seating was aquired, and those sold out....last I heard,over 400 people. Wow! Let the show begin.Some of the highlights for me  were....

John and Brett did a pairs routine.

James Fletcher...blowing kisses at his kite and melting womens hearts.

I did it!  I don't remeber crashing, but did miss my last catch for the end. Nothing spectacular other than the effort. I also acheived the smile that comes with doing it. Quite frankly, that's all that matters.

The night brought on the usual kite addicts fix of team routine creation,stick paractice, and beach runs over what we reviewed.... still not there. Guess what....tomorrows show time!

Day 4... Team KiteLife steps out on the field. John Barresi , Scott Benz , Eli Russell , Brett Marchel...never completed the song or the routine. Crowds building during a few dry runs. Then ....it happened.

We hit our written routine mark clean...when John almost leaped from his skin..calling land... as the line insisted we continue.  We then freestyled the remaining unwritten portion into some snap 45 knock down landings.

Ya! That just happened....and continued throughout the day with a few minor bumps here and there.

Day 5..  We practiced more...lol We performed with a few more issues than the day before. All in all I am super stoked at what we achieved. The skies the limit and we still have both feet on the ground.

That night brought some spectacular event ending flying on the beach between Team KiteLife and Team Rev Riders. Hashing out moves..switching out members and styles...just so much fun!

In the summarized end of my babblings.

Team KiteLife is alive and pumping! Congratulations guys....I would call that... 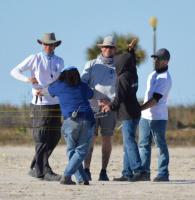 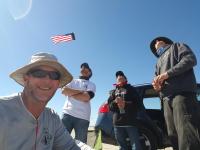 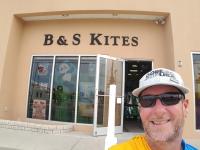