Steve Anderson, one of my fellow Illinois Kite Enthusiast (IKE) members, posted online that he hoped to get out and fly with a few fellow members over the weekend. Steve is a member of the 180GO! Revolution kite flying team. So when he wants to fly I try to participate. Because I learn a whole bunch from him.

As it turned out on this 45 degree day it was only Steve and myself. Steve had recently participated in the local UMake kite building workshop. And had his newly made Swallowtail Delta ready for its maiden flight. I arrived at the flying field early and assembled my mid-vent B Pro Rev. Flew a bit until Steve showed. I was then able to document his new kite's final assembly and first launch. 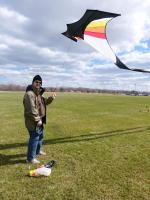 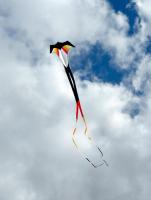 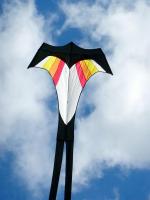 He then assembled his Shook Mesh and we spent about an hour flying. Including what we refer to around here as our leisurely "DuKane" (DuPage and Kane County) style. That is while leaned back in our portable folding chairs. (My wife, Karen showed up to grab these photos.) 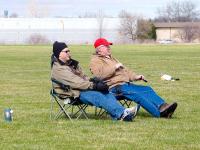 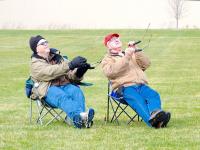 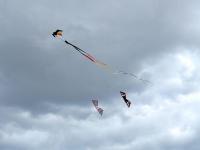 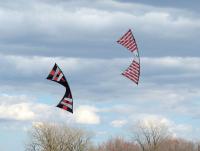 I'm looking forward to the rest of the 2016 kite flying season. This will be my second full summer flying Revs. Last summer I had two goals. To fly with my arms held lower and to perfect my downward turns while near the ground. Mission accomplished on both. In fact I hardly turn upward at all anymore.

This year I hope to get in more team flying. Concentrate on some of my position holding skills in the ball. And speed control while following in line. Also to work on bicycle spins. Plus all the other good stuff.