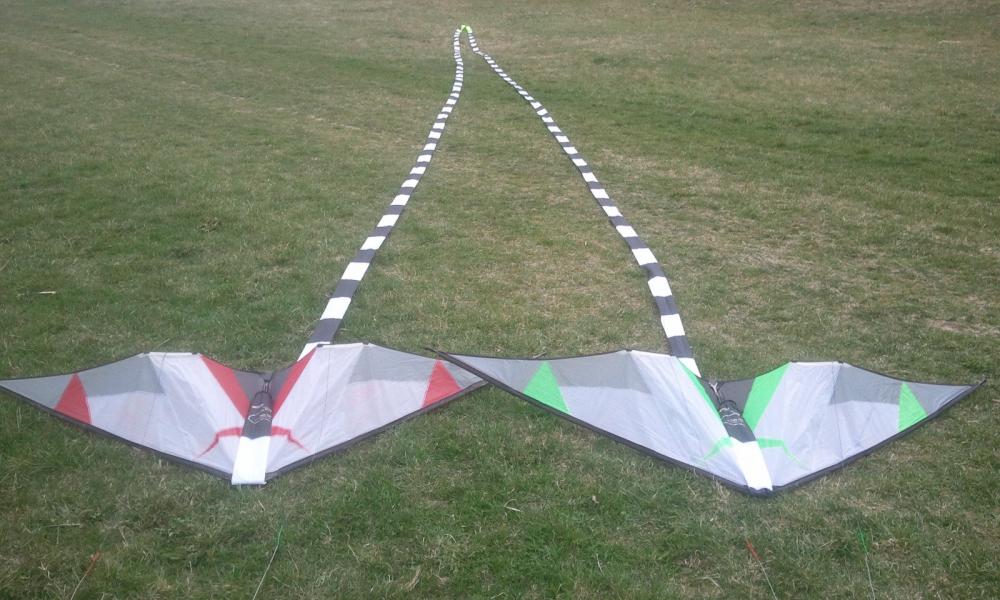 Proud as a child (for some minutes at a time)

Ready to roll up into launch position by using a hard wind parking method (the lines/leaders up and around the trailing edge so that the kite can be rolled forward into launch position by pulling the lines). It wasn't always necessary with this type of start, conditions were quite OK today, but was sometimes a bit on the lower side - no tail weights fitted (serves no purpose here anyhow). If you want to apply low wind techniques you need to have both the noses pointing either up or down at the same time. The wind range that I can do do dual DLKs is quite narrow given my current skills. Low wind means that the kites needs to be synchronized as just stated when flying up/down and hard wind well that is just makes the kites move too quickly. Perhaps going to 40m would allow higher wind speeds, since there would be more room to maneuver the kites?

Most of the time I let the kites go left right in rather synchronized way. Often had them high up in the window, so my neck got a bit sore after a few hours. When doing normal (single) DLK tricking, I'm closer to ground most of the time which doesn't strain your neck. Even though I kept it simple, mainly striving to keep the kites in the air and avoiding the un-planned landings (which worked for some minutes at a time at best) I was quite satisfied.