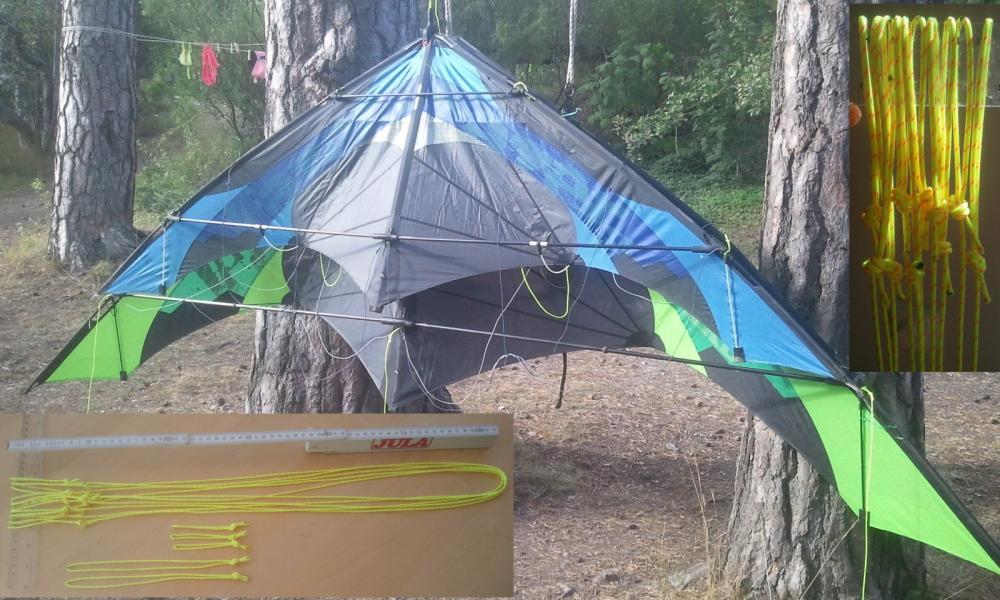 My latest project is my first stack. Yes, I probably should start with something smaller, but too much pull has not been a problem so far with these kites. I've had much respect for the wind when using the Fazer XXL (or rather when choosing to use it or not) which has resulted in much physical exercise when keeping it in the air. Slightly remarkable IMO is the opinion of my mother in law: "The green kite looks better than the blue one". I've been flying the Fazer XXL in spite of its look. I have also ever heard that it ever looks good from anyone anywhere any time. However I've gradually gotten used to its appearance, but can't say it is one of my better looking kites. My plan for the stack is to fit two Prism 75 feet black and white tube tails to each of the XXL wingtips and possibly a 1m line laundry rotor (will slow down too much?) to to the XL spine.

I learnt about stacking from: http://kitelife.com/forum/topic/6478-setting-up-a-stack/, Prism stacking instructions and Highflykites > Kite manuals > Stunt kite manual (part 2) > Stacking stuntkites. I added pig tail like connectors on the first kite (XL) to be able to connect the kites quickly and to trim the angle of the last kite. I use a Liros 200daN/kg (440lbs) bridle line (Dyneema with a polyester sheath). It is about 2mm in diameter and roughly matches the bridle diameter (strength?) of the smaller first kite (Fazer XL).

I don't know when I'll be able to test the stack. The size should make the wind range narrower. The upper is of course how much sail you can manage in high wind. The lower limit I expect to be fixed, possibly increased a bit due to complexity and  that I'm not being used to stacks. And besides, vacation is over and it's back to work now.

Another thing that might limit future kiting sessions is my quest during the last three months to reduce the number of: "I always wanted to but I never did"s. I've devoted much spare time to kiting during this period when doing so, which starts to be somewhat less popular with my family. However during this time I have (or started to): learnt to fly two DLKs, experimented with multi kite handles, built the kite bag transport armor, got started with quads, experimented with patching full vent into a mid vent and a standard, gotten hold of a sewing machine (and made a small bag just to learn the sewing machine basics) and now I've finished (but not tested/trimmed) my first stack. Before that it was piloting DLKs "only" and made occasional repairs. Kiting is currently somewhat with the sense of being a Jack of all trades but master of none. Perhaps it is time to instead focus on depth on what I've started rather than covering new areas of kiting for a while.