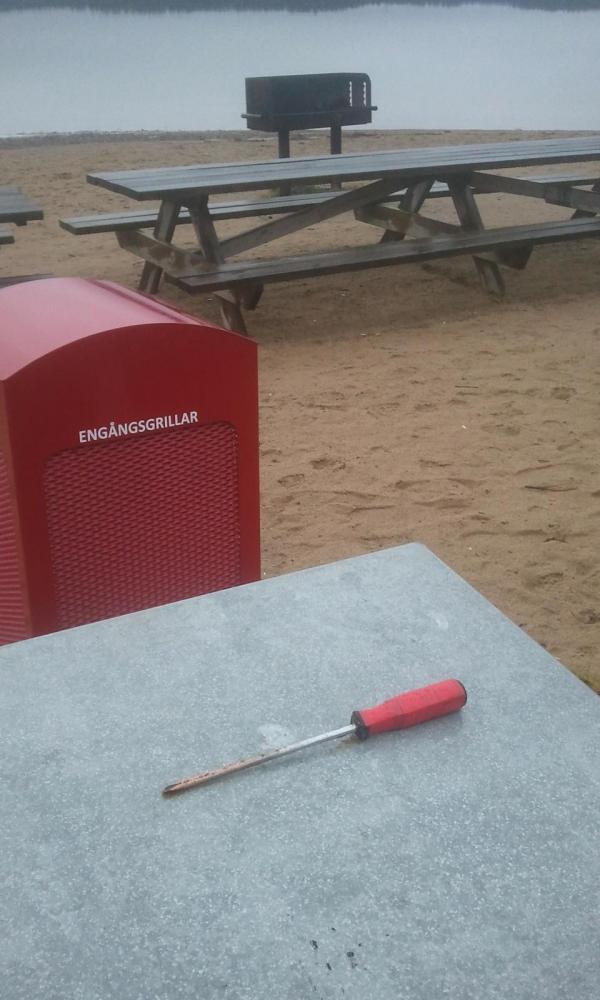 A little red screwdriver of consideration

Couldn't find my kite stake when preparing the lines. Found it accidentally on top of a garbage can. Had forgotten it on the field about two weeks ago.

The session, well it was a kind of messy less well organised story - well every session is some kind of practice of something, but not necessarily in what you planned.

It is the day before X-mas (the 23rd, since we celebrate the 24th here). After several pre-X-mas errands by car I now saw an opportunity to head to the field/mini-beach. The forecast wasn't really spot on, the hard winds missing, on the other hand the rain was only light and later ceased. The main things to attempt to practice was flic flacks (and very much remains to learn here) and occasionally manage to mix it with an occasional rung of a JL (equally much practice needed here as well). For the QLKing the most "urgent" was the clock work practice that seems to have gotten very lame (or have I been looking on to much perfect Youtube videos with perfect crisp ones to alter my view on what is acceptable). Yes, the new Speedwing should be tried out as well.

After the assembly I was looking for the kite stake... nowhere to be found... strange. Since the ground was mostly frozen not any branch could be used as a stake .... hm.. tie the handles to the plastic bag of lines? Then just when starting to unwind the QLK lines I saw it the red screwdriver (actually only red tape) on top of a garbage bin. It had been on the field for almost two weeks. Thank you everyone for leaving it in place! The session well, rather dirty winds (an upwind cape might be responsible) almost parallel to the little (and crowded by fixed grills and outdoor furniture). The only really new here was to shift focus from the LE  to the rear part of the QLK thinking of the rear "rudder surfaces" to the extent that it almost became the focus and possibly "a second LE". This was only initiated during this session, lets see where this goes. I normally think another kite gives some new input, but for framed QLK I "only" got the 1.5 B-series, so I really try to get hold of new inputs when I get to see them.

For the DLK Infinity this session was quite much a drill in a kind of crowded precision rather then the tricks I intended to work on. I only had the 20m lines, was too lazy to move the QLK lines that occupied the free space between the rubble (outdoor furniture) on the narrow beach. Not much free space for up-/down-winds running either. Got a feeling from the rather few attempts that I was more maintaining "skills" of the tricks I intended to practice, rather than progressing. For the last few sessions the DLK I've almost completely limited me to one kite (the Infinity) due to some early progress here. It is some kind of stability I'm after I guess when the flic flack/JLs are so so new and unreliable.

Just I little time before going home I remembered the discussion about hand movements and drum hits ( http://kitelife.com/forum/topic/6403-hand-position/?do=findComment&comment=68573 ). Arrg.. should have had this in my head from the start. Be well prepared for your sessions if possible. This whole session kind of competed with many errands. It was booth crowded in available space and time so to say. On top of this I had completely forgotten to test the Speedwing... (more of that in http://kitelife.com/forum/blogs/entry/293-20-first-minutes-of-speedwing-a-really-short-session-for-a-change/ )

Well I have had better sessions, most will be forgotten, but the kindness someone showed when making something as small as a worn screw driver/kite stake visible and the fact that it had been left on the beach for in the first place, so that it later could be found was a nice one. Kind of gives the field a bit of a home feeling.

Photo Information for A little red screwdriver of consideration