Have you seen this ?

I don’t sit in an office pushing kites, nor am I landlocked in a low kite activity region of the world... Between on field time, web presence, training programs and everything else, it probably wouldn 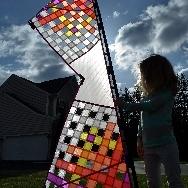 IMHO just because the eyes are not copyrighted doesn't make printing a sail with them OK to do. Rev proudly called the eyes a masterpiece and I feel that if you are going to call something artwork co

Seriously ? Aren't these 'Bazzer's Eyes' ? I'm not a big fan of Revs, I flew for years before giving in and getting my first Rev. OK, to me, the Rev was a necessary evil, something to fly when th