The tenth annual Kite Party (KP) in Huntington Beach (CA) was held on March 10-11 this year, drawing fliers from as far away as Germany… It’s perfectly scheduled since it’s a time of the year when much of North America is still thawing out or is still downright frigid, so kite fliers often make turn this into several-day vacation on the sunny beaches of Southern California, to enjoy the generally lab-grade winds and beautiful weather.

The deal is that KP is a true kite party… While the public is treated to a show, it’s really a non-festival for the fliers – organized by Dave Shenkman, owner of the Kite Connection on the Huntington Beach Pier.

Starting a few months prior to the event every year, fliers register via the official Kite Party website – there is no registration fee (100% FREE), and there is a pretty equal mix of ALL kinds of kite genres from single line art to giant inflatable show kites, trick / stunt kites, quad line and fighter kites… There are two LARGE primary fields immediately north of the pier that is shared by attendees, one for the sport kites (dual/quad) and one for the single line displays.

While there are generally one or two hours dedicated to demonstrations each day and the brief public kite fly on Sunday, the fields are wide open to registered fliers so as participants enter and exit the field, just pick a hole and fly in it… The only concern is common sense etiquette like being aware of your airspace (i.e. don’t be a hog), pack up your kite and lines when not in use, obey the 75′ line length limit (more space for everyone), no whining, and be polite… Have fun, it’s a party!

With this open and friendly format, both fields become quite the rotating showcase with kite designers, recreational and “pro” fliers alike, all sharing ideas, testing new products and enjoying some of the best kite flying you’ll find anywhere… It’s a rare opportunity to immerse yourself in the culture whether it’s seeing one classic kite after another roll out of the bags of Mike McDonald and John Chilese, new prototypes from Christoph Fokken and Jon Trennepohl, non-stop Rev mega flies from IKE and friends, amazing single line designs by Ron Gibian and Bazzer Poulter, or the stylings of top-caliber pilots and teams like Devin Cobleigh-Morrison, Paul DeBakker, iQuad and Too Much Fun, there is something for everyone and more than enough to keep even the most casual flier entertained for hours.

My group (iQuad) arrived early Thursday evening and settled straight into the Howard Johnson for some rest – it was the first time we’d gathered together as a team since the SPI Kite Festival, and we had an unfinished routine to practice through most of Friday… There were a lot of fliers on the beach with TONS of interesting toys, but we didn’t have much a chance to check it out.

Saturday morning kicked off with our usual breakfast stop at No Ka Oi… A lot of the fliers go to the Sugar Shack next door but ever since we tried No Ka Oi a couple years ago, we’ve never gone anywhere else because the service is always friendly, the food is WAY better for similar prices, and it’s not nearly as crowded or hectic.

After breakfast, we set up our camp next to Ben Dantonio’s island and set about joining the party – greeting old friends, making new ones, a bit of equipment tuning and free flying, then a quick short line team practice before being called in for the morning fliers meeting… Less of a meeting and more of an official welcome, our host Dave Shenkman facilitated a quick round of introductions, reminded everyone of the ground rules and added his own excitement to that of the participants.

A couple of folks stepped up to organize group photos for kite clubs (like IKE), specific kite types or manufacturers and the like – it really is a casual showcase (in all the best ways) and fliers are always keen to show off their favorite kites… Just to give you an idea, I know there were group shots for Gary Drumgold kites, Skyburner and Jest of Eve, to name a few.

Competition-seasoned fliers included Devin Cobleigh-Morrison, Paul DeBakker, Alex Herzog, Jon Trennepohl and Mark Lummas, all of whom saw plenty of time alongside recreational fliers, some of whom had some seriously respectable trick skills in their own right… Naturally, designers are keen to have their kites test-driven at Kite Party – there’s nothing like being shown what your kite can really do!

On the south side of the pier, Revolution’s learn to fly field were going strong with Lolly, Joe and David Hadzicki all taking shifts with the public.

The single line field saw a variety of wonders gracing the wind, while Rev fliers formed and reformed mega fly groups directly next to the pier throughout the day… Some of which was captured in this spectator video from Saturday…

Getting back to the routine my iQuad teammates and I had been working on, set to Bohemian Rhapsody by Queen – as it turns out, totally unbeknownst to each other, Team Too Much Fun and iQuad had both been developing their own routines to the same musical selection! Wow, bit of a pickle… After a brief discussion, it was easily agreed that the two totally different flight styles, infrequent overlap at events and the significant effort already put in both teams, we’d both stick to our guns and use the track – and indeed, the audience got two totally different shows!

After scouring YouTube, I’ve been unable to find footage of Too Much Fun’s rendition on Sunday (they weren’t there on Saturday) but I did find the iQuad performance from Saturday, filmed by the same spectator as the video above…

FYI, we really enjoyed the performance to Bohemian Rhapsody by Too Much Fun on Sunday, and hope they’ll keep honing it like we’re doing with ours… The two teams are good friends and friendly competitors, so it is what it is, two different flavors – and besides, we could always “fly for pink slips”.

Closing out the day, attendees gathered at Lamppost Pizza in Huntington Beach for dinner and the annual Kite Party auction… As usual, tons of people showed up to hang out and bid on the many interesting and special items only found at auctions like this – I’m always surprised by some of the deals that people find here!

After a breakfast repeat at No Ka Oi on Sunday morning, we pretty much did an on-field repeat as well – great wind, great flying, great friends, great weather… Tough to bear, but those in attendance did their best. <grin>

We did see two highlights unique to Sunday…

Every year, Kite Party invites the general public to come out onto the field to buy and fly a kite for charity… Motivated by Ben Lummas’ own struggles with bone cancer, this portion of the event is always a highlight with a whole lot of people putting up solid flying single lines in mass, getting help and encouragement from the attending fliers while Dave works the field on wireless mic, really good mojo all around. 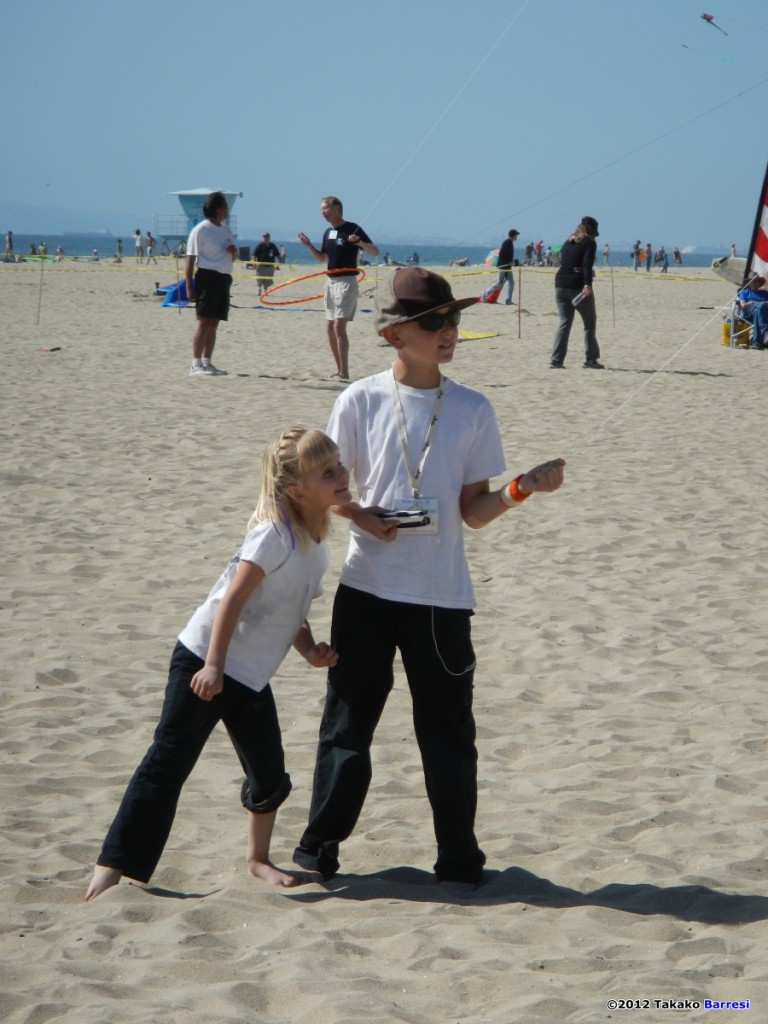 Also  in memory of the Tsunami disaster in Japan on 3/11 last year, Dave Shenkman asked for an extended moment of silence while fliers lofted all manner of white kites and thoughts of our friends overseas… This one was pretty close to home for iQuad, since Takako (TK) moved to the USA from Japan less than 3 years ago. 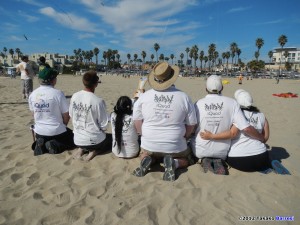 Rather than getting into every detail of both days, I’ll suggest YOU take the trip next year and see for yourself… Having attended Kite Party for most of it’s past ten years and tons of other events in-between, this non-festival is on my annual “must do” list and it seems like gets better every year.

Be sure to check out the extra Kite Party X photo gallery by John Chilese.